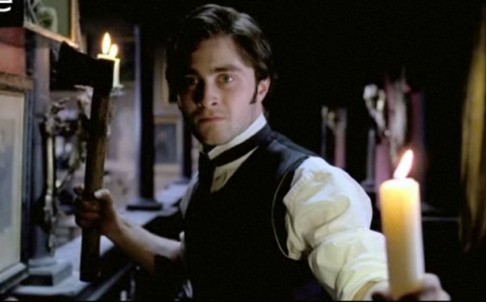 The Woman in Black

When I was little, I went to see The Secret Garden in theaters with my mom. During one scene, as young Mary Lennox is creeping towards the garden, I started to freak out. When my mom asked, “What’s wrong?” in a very nice voice, although I’m sure what she meant was “Why the hell is my child such a ridiculous person that she thinks that The Secret Garden is a horror movie?” I struggled to find the words to explain exactly why this scene had affected me so extremely.

But the thing is, and I realized this while watching The Woman in Black last night, scary music and people walking is pretty much 75% of most horror films, and 90% of The Woman in Black.  Most horror movies can be boiled down to the use of foreboding music, slow walking, and startling noises. It’s part of why we love them; it’s a relatively safe way to utilize that evolutionarily-mandated fight or flight instinct. But good (or great) horror movies manage to utilize brilliant story telling techniques and thematic resonance as well as preying on the Darwinian urge to feel fear at loud noises.

The Woman in Black features something by way of story, I guess. Daniel Radcliffe plays a widower who comes to a small town in early 20th century England in order to wrap up the affairs of a deceased widow. Along the way, he uncovers a surprisingly straight-forward mystery involving a drowned child, a bereft mother, and a series of heinous child deaths. He also stupidly decides to spend far too much time in a clearly haunted house, and ignore the constant looks of eagle-eyed fear that the townspeople keep giving him. The mystery unfolds dully, without a single surprise to it, and the child deaths that characterize most of the violence, lack anything shocking or even particularly scary about them. Don’t get me wrong, I’m not jonesing for a movie full of gruesome child murders, but if you’re going to center your movie around this idea, then find a way to make it feel horrific, not just exploitative.

Daniel Radcliffe, by the way, is perfectly fine in The Woman In Black, but woefully miscast. I can understand the impulse that led Radcliffe to chose the movie as his first post-Potter offering, but putting himself once again in a world full of long walks down ancient-looking hallways, ghosts, and a pivotal scene that uses a train station as a way point between life and death probably wasn’t the best way to make me stop saying “Ten points from Gryffindor” every time his character, Mr. Kibbs, does something stupid. Plus, Radcliffe doesn’t look old enough to play a lawyer with a four year old son, even with the changing social pressures of 100 years  in the past. But Radcliffe himself is perfectly serviceable in the tale, and shows a continuation of the growth he demonstrated throughout the Potter films.

In the end, The Woman in Black has little to offer its audience outside of a few, nerves-induced jolts, or, as 5-year-old Rachael would have put it, “scary music and people walking.”