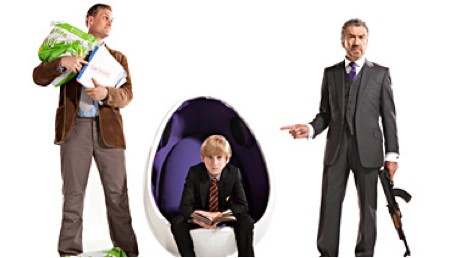 I’ve often praised the Netflix/Hulu stumble upon. It’s one of the greatest parts about streaming video, the ability to happen upon strange, offbeat, foreign or forgotten gems when browsing through one’s Netflix queue/hulu home page. So here’s the latest installment of my two part series, Better Know a British Sitcom.

Spy, the shortly-named Sky-1 tv show, is about a single dad, Tim, who quits his deadend job at a computer shop while fighting a custody battle. His son, Marcus, is an evil genius, his social worker is an obsessed sexual harasser, his exwife is a shrew, her new boyfriend is oddly obsessed with him, and his best friend is an angry conspiracy theorist. Tim sets about getting a new job to impress Marcus, and ends up falling into a pretty damn cool one as an accidental spy, only to find out he’s not allowed to tell his son.

Only featuring six episodes thus far, and each one zipping past in a whir of charming British accents, tight, cute plots, and endearing acting, Spy isn’t really much of a commitment. It is a delight. Although hardly ground breaking television, it takes it’s strange and hokey premise to adorable lengths, and the sentimentality inherent in a “single Dad” storyline is completely offset by the fact that every single person on the show is a complete weirdo. It’s very comfortable in its sitcommy rhythms and weird as hell characters (if the actual MI-5 is run like the one on Spy, Britain is in very grave danger indeed), and its intense comedic confidence helps to sell every episode thus far.

As Tim, Darren Boyd (who looks like the love child of Alan Tudyk and Carter from Eureka) is an inherently likable everyman. But the real stand out of the show is Jude Wright as Marcus. The evil genius son thing should seem cliché, but Wright manages to create this incredibly unique comic creation with a genuine humanity under all the movie parodies and stoic glances. His series long “romance” with a fellow super genius should not be as affecting as it is, considering they play nine year olds.

Check out this strange little delight, like an otherworldly and way-more-simple Chuck, for yourself over at Hulu.