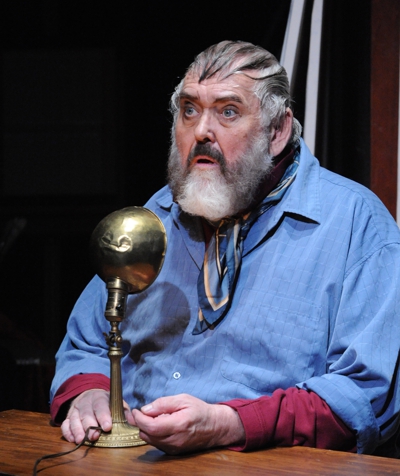 The one-man show is a tricky form that seems to always work best in Fringe Festivals-where plans are spontaneous and ticket prices are low- because it’s a tricky thing to wrap your head around that one person can carry a show. Of the many brilliant one-man acts I’ve seen, all have had low budgets, most have had pretty simple setups and all have been one-acts (because the story was small or the performance was exhausting- here’s locking at you Martin Dockery, you manic lightning bolt of a monologizer). As such, I was expecting a small but commanding performance from Jim Brochu in his current show at the Bathurst St. Theatre. Instead, it’s a full two-act tour de force from the writer-performer with a story so rich it could sustain another hour and an entire ensemble (though it in no way is worse off for the lack of them).

Brochu’s story is about Zero Mostel, the real-life Tony-winning actor who got senselessly entangled in McCarthy’s Communist witch hunt and bizarrely blacklisted in 50s-era Hollywood. Brochu’s Mostel is the sort of massive personality that could (and did) stumble into success by just being so damn naturally entertaining. He’s grumpy and harsh and darkly sarcastic and it all comes out as a riotous joke- even his death threats- until it doesn’t anymore. As dark as his (painfully clever) comedy can get, the switch to Mostel’s furious anger is still startling. There comes a point in Brochu’s boisterous and pointed portrayal when his hearty rumbling turns to thunder and his eyes narrow in on events that stir the worst in him. The hate that takes over when he talks about the man who named him before the House Un-American Activities Committee and the sorrow that permeates the theatre when the tragedy of Philip Loeb comes up are inescapable. Brochu’s performance is so palpable that he rallies an audience to his grief with just as much effect as when he rallied us to laughter. It’s a remarkable turn in a powerhouse production created and manned by one single performer with the presence of dozens more.