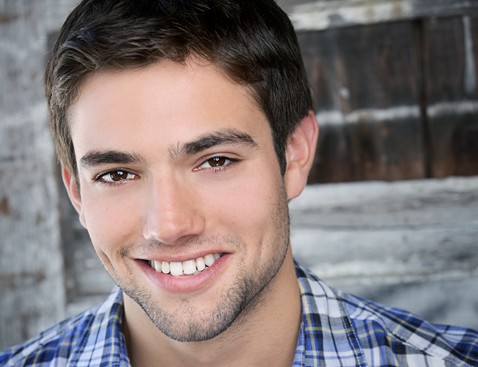 22-year-old Greg Nussen first came onto the My Theatre radar with his nuanced performance as Orpheus in Boston’s Independent Drama Society’s wonderfully innovative production of Eurydice (which is nominated for 4 My Theatre Awards, including Best Ensemble and Best Production). He was then nominated for Best Supporting Actor for the standout role of Septimus Hodge in Arcadia with Bad Habit Productions. His co-star Alycia Sacco is also nominated, as well as director Daniel Morris, the ensemble and the production. Greg took some time out from his MFA studies at Columbia University to talk about those memorable roles.

Can you remember your first experience with theatre?
When I was around seven years old, I was cornered at a Bat-Mitzvah party to join an after school performing arts school (it’s a long story, but I was basically embarrassing my parents by dancing my ass off on the stage with the live band, and then got “discovered”). I was cast as the Scarecrow in The Wiz, with a curiously all-white cast. Go figure.

What actors and actresses have always inspired you? Are they the same today?
As far as stage actors are concerned it wasn’t until recently that I started learning the bigger names in the business, mostly because southern California isn’t exactly known for theatre. But over the summer I saw Mark Rylance in Jerusalem, which was the most powerful stage performance I’ve ever seen. Film-wise, I really admire Daniel Day-Lewis, Ryan Gosling, Phillip Seymour Hoffman, Paul Giamatti, Kate Winslet and Cate Blanchett, amongst others.

Where did you study/develop as an actor?
I studied at the Stella Adler Studio in New York City for a summer a couple years ago. I studied abroad for a semester while attending Emerson College, in Boston, at an arts institution in Paris. So while I was there I took a few classes at the Bilingual Acting Workshop in France, which also has a center in New York. I’ve also taken improv classes at the Upright Citizen’s Brigade theatre in New York City, and I am currently a first year M.F.A. candidate in Acting at Columbia University in New York.

Do you have any dream roles you think are perfectly suited to you or something completely against type you’d love to try as a big challenge one day?
I think I’m still learning what my “type” is, but I also really hate the idea that I have to limit to myself to a certain range of characters. I’m really drawn to quite a few roles, but right now I’m really interested in playing a lot of the Shakespeare leading men, particularly Richard II, Iago and, of course, Hamlet. But I also adore farce on the stage, and I’d love to play a Noel Coward role.

Which directors and actors have had a major influence on you throughout your career?
I’ve always really adored Anne Bogart and her writing, so it’s really a dream for me to be at Columbia because I have the opportunity to be taught by her. On the acting side of things, I’ll go back to Daniel Day-Lewis, because the range of his characters in his career have, in my mind, never been equaled.

What’s your favourite role you’ve ever played or production you’ve ever been in?
This sounds a little ridiculous now that I think about it but when I was like ten years old, tops, I played Snoopy in You’re a Good Man Charlie Brown, which was a blast. I like carefree characters. But I have to say I really loved being in Arcadia; the cast was such a blast to be a part of, which is kind of odd and sad in a way for me since it was my last production in Boston.

You were great in IDS’ Eurydice. What was your experience working on that show?
Playing Orpheus was an enormous challenge for me, but Lindsay Eagle, the show’s director, was very helpful in the entire experience and I felt free to experiment a lot. It was, along with the Duke in Measure for Measure- which I was performing at the same time, the first lead role I’d ever been cast in, which was a little daunting. I tend to be cast in the zany comic relief role. But I think Lindsay’s vision for the play was really stupendous and innovative while still being faithful to Sarah Ruhl’s text.

You’re My Theatre Award nomination this year is for Bad Habit’s Arcadia. How did you approach the complicated role of Septimus?
Septimus was oddly easy to step into at first; I was very comfortable with his caustic, dry humor and his charm. Alycia Sacco, who played Thomasina, was an incredible joy to work with, as were the rest of the cast, but I think particularly when your main scene partner is so fantastic it’s easy to make things work. I tried to acquaint myself as much as possible with the era and with the fields that Septimus knows so much about. I think we all felt, at least at some point, that our characters were impossibly smart, so I was focused on at least giving off the illusion that I was as knowledgeable as he was. Other than that, I worked on understanding my relationships with every other character, just as I might on any other show.

Describe the rehearsal process for Arcadia.
Daniel Morris (our director), had us do a lot of text work, which I think is pretty essential for this kind of text. But we jumped into blocking pretty early, which I really appreciated. Daniel cast the show so perfectly that I think much of that “who is my character?” stuff was easily thrown aside. We tried to play a lot with the form of the play, with the ghost-like crossing over of time periods from 1809 to present day, and there was a lot of getting acquainted with the theatre-in-the-round space.

What were some of the biggest challenges working on this production?
Really the biggest challenge was to move the story forward, which I imagine would be a similar response for most people working on the show. Stoppard wrote some very accessible characters, but his story is so historically entrenched that there were a lot of times where we’d stop and say, “Wait, what’s being said here?” I remember that my scene with Lady Croom (played by Nora Long) where the subtext is, essentially, “let’s go have sex”, was particularly difficult, because at first glance there’s a whole lot of exposition. But, when we really understood that they were just trying to seduce each other, it became a lot easier.

Do you have a favourite moment in the production?
Glen Moore, who played Captain Brice, and David Lutheran, who played Ezra Chater, would not fail to make me die laughing every night. I think it sort of became a ritual with them of sorts – who could make me laugh harder. But in particular there was one night where David had a previous engagement that threatened him missing his first entrance in the show, and we had prepared the week before for an understudy to come on. But we were all so hopeful that David could make it and I remember I had to get on stage that night without knowing if he’d be there or not. Anyway, at his first entrance, I had my back to him, talking to Alycia, and I heard footsteps and turned around and saw David, standing in the archway, sweating like crazy with hair incredibly unruly. I was so happy to see him that I couldn’t stop beaming the entire scene, which of course ruined it, but I didn’t really care.

If you could pick one definitive moment in your career up to this point, what would it be?
I was on the wait-list to be accepted to Columbia University’s M.F.A. program, and I was overjoyed when I found out in July that I’d been offered a spot, so I have to say that this has been my biggest opportunity thus far. Of course, I’m only twenty-two.

What are you doing now/ what’s your next project?
I’m acting in a few things here and there at Columbia, and I’m working with Nora Long on writing a new play, which I’ve never done before. I’ve also been working on a one-person show, so I’m trying to stretch myself into the writing arena. Other than that, I don’t know! We shall see what the summer will bring, although Chris Larson, who played Noakes in Arcadia, has threatened to bring me back to Boston for Hamlet.