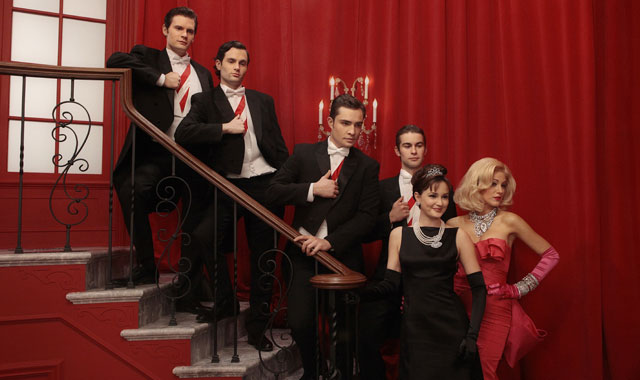 This week, the CW’s first hit not born on the WB or UPN hit the 100 episode milestone. That all-important right of passage not only proves a show’s lasting appeal and lends it a bit more gravitas, it’s the point at which the syndication money  becomes a major factor (most shows sell their rights at that mid-season-five mark). No one was doubting super-producers Josh Schwartz and Stephanie Savage would make it to 100 some day, but I was not expecting it to be Gossip Girl that took them there (alas, my beloved Chuck went out at 91- so close!). The Upper East Side soap (based on the popular book series) hit the market in 2007 just after the end of Schwartz’s first big hit The OC, and it quickly seemed as though the rich-kids-in-highschool formula had simply shifted coasts over the summer. But at the centre of The OC had been friendship, family and the signature Cohen sense of humour. Gossip Girl is like The OC‘s sarcastic cousin- it’s less earnest, much more stylish, and a whole lot darker. The love story to watch on The OC was about a self-centered but golden-hearted geek and the shallow but loyal girl he’s loved since he was a kid. The love story to watch on Gossip Girl is about an ambitious, manipulative and guarded heiress and her tortured, damaging and intense soulmate. There’s humour there too, and the occasional sweet friendship story, but the soul of Gossip Girl is darker than The OC‘s- and where there’s darkness, there’s years of storytelling to be done. At least 5+ years’ worth, apparently.

And so we begin the series’ 100th episode, midway through a season of uneven Nate career stories, incessant Dan-Serena flip-flopping and a Royal Wedding preamble that’s seen Blair get lost in the shuffle of over-bearing mothers-in-law and sketchy princely paranoia. After the epic car crash that left us “wondering” whether the show might kill off it’s 2 most interesting characters, we picked up with 2 episodes of Blair preparing to marry Prince Louis of Monaco instead of running away with Chuck because she made a deal with God after the accident- she’d honour her vow to Louis in exchange for Chuck’s life. So, with that fabulously terrible McGuffin keeping our heroes apart (side note: how great is it that Chuck Bass is our hero- hoorah, Schwartz/Savage and your dynamic character writing!), Blair marries Louis (but not before Georgina- an always helpful, if painfully annoying, plot mover- films her proclaiming her undying love to Chuck). The video gets out mid-vows but Louis carries on anyway then drops the bomb on Blair during their first dance- she’s essentially a royal prisoner now, trapped in a for-show marriage with a man who more or less hates her. It’s a brilliant twist of “oh god, please no” discomfort levels that plays on that creeping “what is up with this guy” feeling you know you’ve been suppressing all season whenever Louis took to the screen. So Blair takes off, into the escape car of her go-to crisis manager Dan Humphrey. Apparently this is stirring up some fan controversy but I wasn’t surprised that she picked Dan. 1) She’s vowed to not be with Chuck so it’ll be at least another half season before she goes back on that, 2) she put a lot of stock in those beautiful vows Louis said, and he revealed that Dan wrote them, 3) she probably thinks Chuck is responsible for leaking the damaging video so doesn’t trust him right now and 4) Dan’s always been the guy these characters call to clean up their messes, it doesn’t necessarily mean she chose to be with Dan, it means she chose Dan to give her a ride. That wedding was getting disrupted somehow but locking Blair in first was a route I never saw coming- and I can usually see things coming. So kudos to these writers- it really does take some smart folks to write something new in this genre.

Highlights of the episode included the show-opening Marilyn-meets-Audrey dancing dream sequence and Wallace Shawn, as Blair’s stepfather, proclaiming the line “look, the Princess Bride” as Blair entered the room- a shoutout to that wonderfully perfect Rob Reiner film he once starred in. I also really enjoyed Chuck poisoning the evil priest to keep him from interrupting the wedding- the fact that Chuck had no intention of stopping the wedding was such a testament to the fact that he truly loves her; more TV trend-bucking from the astute writing staff! delivered perfectly by the exceptional Mr. Westwick. But if I was annoyed by Georgina’s first appearance of the episode (funnily undermined by Rufus and Lily simply catching her), her every movement after that made it worse, culminating in what is surely a red herring as she pressed “publish” on a new article for gossip girl. Apparently we’re supposed to believe that she’s gg’s true identity. Now, maybe she is behind the recent re-appearance of the titular blogger, but there’s no way in hell that narration belongs to Regina Sparks. After what will probably be 6 or 7 seasons total, I’m going to need Gossip Girl to either 1) never be revealed or 2) be an utterly fabulous character, not the universally hated (not in a fun way) Georgina. It would help if said character were played by (actual narrator) Kristen Bell. Either way, to screw with the show’s entire premise for one easy cliffhanger just isn’t Schwartz’s style, so if you’re thinking that’s all there is to the story you had better apologize to the Schwartz/Savage team for that gross underestimation.

I’m liking the creative ways in which Blair and Chuck are being kept apart (though they are most definitely end-game, letting them be together before the series finale will drain the story pretty quickly) and appreciate that Nate is getting something to do that’s not cougar sex-related. I could use a little less Serena, but I do appreciate the idea of her feeling like second fiddle for the first time as she watches Dan pine for Blair. Now, I would have liked to keep Dan and Blair completely platonic just for the variety of it, but since Dan’s been all “complicated” about it for awhile now, that ship has long sailed. I’d like Blair not to go for it with Dan (Who is she kidding? She could never love Dan how he loves her) and for the fallout of her trying not to lose him in that process be where the interest is. Either way, I love that those 2 are plotted together lately- they just make the most intellectual sense of the bunch. I don’t want them together, but as people to fall back on and go-to dates for museum trips, they really are meant to be.

For a 5th season teen show, Gossip Girl is amazingly still alive. And as they leave dead-end characters like Jenny, Vanessa, Eric, Juliet and Charlie behind and get back to the core characters of the show, Chuck, Blair, Nate, Serena and Dan are proving that there’s a lot more juice left in this franchise.