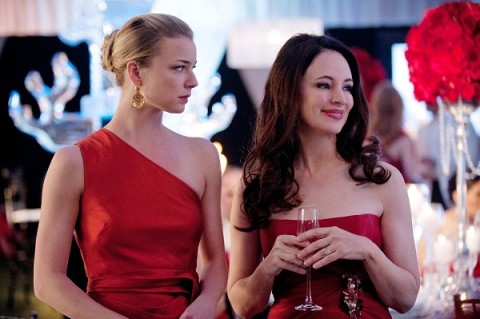 Last night’s highly anticipated episode of Revenge was the fulfillment of promises that were made in the very first few seconds of the series. The Fire & Ice Ball in honour of Daniel and Emily’s engagement and the accompanying shooting that took place on the beach played out as expanded versions of the very scenes we saw back in September, only this time we saw a bit more.

Through a series of circular lies between the series’ most gullible (Daniel, Jack) and flightily problematic (Tyler, Amanda) characters, somehow Daniel ended up on the beach with Tyler’s gun to his head- again. The lead up to that involved Tyler stealing Emily’s revenge box (left to her by her father) and teaming up with Amanda to get revenge on the revenger (where Amanda stands on Emily is purposely mercurial). The tensions teased in enigmatic exchanges in the pilot were explained by low-stakes Charlotte shenanigans (still reeling from her curveball paternity reveal a few weeks ago, she’s screwed up in a C-plot kind of way) and macguffin Emily-Daniel-Victoria drama. Meanwhile, Amanda caught Jack on his boat before sailing away to Haiti and left him with blood on his hands, which prompted him to follow her to the beach and into a pile of trouble.

We come away from the episode with the following information/assumptions and no clear answers: the dead body in the tuxedo is Tyler, not Daniel, so hopefully that means he’s out of the picture from here on out. Somebody shot him- Amanda was on the scene, Jack arrived just in time to send Amanda away in his truck and put himself into suspicion (and evidence bags), and by the time Charlotte and Declan (who were cavorting nearby) alerted the rest of the world that someone’d been shot, Daniel was the only one near the body- confused and covered in blood. So it stands to reason that Daniel will be accused of the crime, while surely some of it will fall onto Jack and the real identity of the killer is still somewhat ambiguous (unless it really was Daniel? that’d be kinda interesting!). Meanwhile, Emily’s mysterious Japanese mentor has picked up Amanda with a sinister look in his eye.

The episode, highly-anticipated as it was, was actually my least favourite of the season so far, which is far from extreme criticism- the season’s been phenomenal. To date, everything has been meticulously planned so that reveals connect dots all the way back through series memory. But this felt like a haphazard decision: “let’s just have it be Tyler, he’s disposable” and, though said twist was teased as and is now being called “shocking”, I was really hoping the murdered party might be someone less disposable, more consequential (Amanda, for example, would have had interesting consequences, thrown suspicion around and opened up the possibility that someone might put it together that she wasn’t really Amanda Clarke) and I’m still hoping the murderer is someone we weren’t expecting (I’ll admit I was rooting for it to be Ashley, if only to make her less boring; or I thought maybe Nolan, because he’s never boring so it would be Extra interesting). The fun of Emily’s plots is in their intricacy; when dealing with major twists, the show’s plots really should be at least as engrossing.