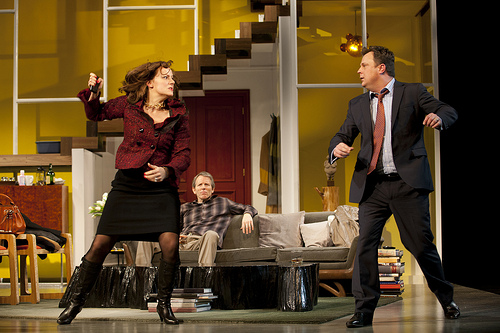 Bowing Down to the God of Carnage

Sometimes you see those shows where everything clicks from the script to the acting to the production elements. Everything works as an integrated whole to create a visceral experience. My night at the Huntington’s God of Carnage was one of these experiences. I wasn’t familiar with Yasmina Reza, the playwright, or her work, but I’ll definitely become familiar with her. Her simple story of four couples meeting to discuss a schoolyard incident between their two sons is ingenious. The simplicity leaves room for the gigantic personalities to emerge as colossal gods and goddesses in this play about our attempts to control our world and our failure to overcome our primitive urges.

The play opens in Veronica and Michael Novak’s spacious Brooklyn apartment. Dane Laffrey, the scenic designer, did a truly tremendous job recreating a functional apartment onstage. The apartment is perhaps excessively large, but these characters are wealthy and successful. Additionally, everything is in its proper place at the beginning of the play; the set is essentially an extension of Veronica Novak’s personality. From the piles of art books to the exquisite vases on display, the house hardly looks like it could ever inhabit a school-aged child. Fortunately, we get to see four children destroy the peaceful demeanor in the hour and a half production.

These four children are the two couples, Veronica & Michael Novak and Alan & Annette Raleigh, who come to discuss their own children’s schoolyard antics. The play is more about how these characters say what they want to say and less about what they actually say. Cleverly written and structured by Yasmina Reza, God of Carnage starts as a comedy of manners, but quickly deconstructs into a study of human characteristics. And this exploration would be nothing without the dynamic actors leading us through our discovery of human nature. At the helm is Johanna Day as Veronica Novak; Day is quite stunning in her attempt to keep her composure and attention, but her unraveling is deliciously exciting. The only struggle Day has is not showing too much, too soon, and that struggle is exactly what I could watch all evening.

Joining Day is her husband, Michael Novak, played by Stephen Bogardus. Bogardus does a commendable job, though he just seems off for the part. Michael is a hardware salesman, and though he’s a wealthy and successful salesman, Bogardus still seems too polished and fits into his wife’s eccentric style a bit too well. However, his chemistry with Day is electric towards the end of the show as they destroy each other with their words and actions. I wish they didn’t fit so well together in the beginning though because it made me doubt that they came from different worlds.

Alan Raleigh, played by Brooks Ashmanskas, and Annette Raleigh, played by Christy Pusz, match each other perfectly. Ashmanskas’s recurring cell phone conversations were a highlight for me, but I wish Pusz’s reactions had crescendoed. Pusz delivered some fine moments with difficult material, but I never really felt for her character until the end, nor did I believe her antics. Perhaps Pusz and Ashmanskas did not have the chemistry of Day and Bogardus. Regardless, the four of them are electric to watch as the comedy and, dare I say, tragedy of life grows. Ashmanskas was the strongest at the physical comedy, using a deceptively comfortable post-modern bean bag chair and his glass of alcohol to fully live in this ridiculous world of manners and poise. Day, however, truly controlled the action as she found the pathos in the play. The audience is tired and thankful by the end of the play when Day collapses from the exhaustion of the hour and a half bustle onstage.

While an exciting whirlwind of a show, the Huntington’s production passes by briskly and succinctly, thanks to director Daniel Goldstein. Goldstein has assembled an extremely talented cast who he has helped mold into discovering the intricacies of modern day culture and class. If you think this production is a stuffy “drawing room” play, think again. This play has toilet humor, witty one-liners that zing, and enough force to keep you talking about the ideas and characters on the walk home. My only concern was the pre-show scrim, which included a projection of a wandering rodent. My friend thought it was a rock at first; I thought it was a rat. While the rodent is really a hamster and fits into the show’s plot, I was still puzzled by its inclusion. Regardless, the technical aspects were stunning as usual, especially the character-perfect costumes by Charles Schoonmaker, though I will have to deduct points that Alan and Michael dressed a bit too similarly.

You have one week left to catch the Huntington’s inspiring and hilarious production of God of Carnage, playing until February 4.