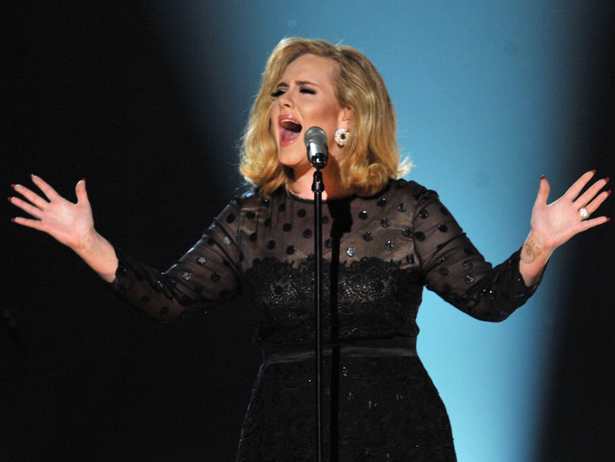 Last night’s Grammy Awards were all sorts of entertaining. With performances from almost all the major artists nominated, four tributes to late and former greats, a touching In Memoriam segment, a smooth host, a show-ending multi-talent guitar jam and an Adele sweep, it never occurred to me to be annoyed by the length of the 3 and a half hour long show.

The Boss kicked off the festivities like the superstar that he is, playing with the dearly departed Clarence Clemons’ nephew and the rest of the E Street Band on his new single “We Take Care Of Our Own” (which I’m downloading this very second).

He was followed by the first appearance by host LL Cool J, who welcomed us to a Grammy night fully in the shadow of Whitney Houston, who died just over 24 hours earlier at the so-low age of 48 in her Beverley Hills hotel room. The memory of one of music’s saddest and most beloved wonderwomen was given its due credit here with a prayer led by Cool and a clip of the singer’s greatest “Grammy Moment”, then later on with an emotional performance by Jennifer Hudson of Whitney’s iconic “I Will Always Love You”. But LL Cool J kept the night moving, as he did for the 3.5 hours that followed, by encouraging the audience and artists to not be afraid to celebrate despite the tragedy, to focus on the power of music and the amazing talent that’s still with us.

In that spirit, Bruno Mars really got us started with a sensational, high octane performance of “Runaway Baby”. I love Bruno but I’ve never loved “Runaway Baby”, until last night. His oldschool sparkle and incomparably flirty charm was just what the room needed to remember the happy. A moving tribute to Etta James from the ever-soulful Alicia Keys and Bonnie Raitt followed, but had much more of a “thank you” than a “we miss you” feel and the energy stayed up.

There were 2 tributes to living performers: The Beach Boys and Glen Campbell, wherein aging stars sang their hits alongside the hot stars in their footsteps. The camera was obsessed with Adam Levine during the loving Beach Boys reunion (I mean, who isn’t obsessed with Adam Levine?) and The Band Perry stole the Campbell show (sorry Blake, I love you, but you were boring).  And boy was it fun to see the crowd rocking out to “Rhinestone Cowboy”, including the enthusiastically awkward bopping of Sir. Paul McCartney.

A myriad of decent performances took over the night. Foo Fighters (led by my beloved Dave Grohl) were relegated to a satellite performance space while performances ranging from acceptable to mediocre took to the main stage, including the likes of Chris Brown, Jason Aldean & Kelly Clarkson and Rihanna & Coldplay. Both Brown and Foo Fighters made second appearances as part of an over-the-top ode to electronic dance music (with Lil’Wayne and DJs David Guetta and deadmau5). Katy Perry started off crazy machine-voiced then proved her usual exuberantly fun self after a staged blackout, but all her theatrics (and blue hair and spandex) just made me more excited to see Adele stand still in front of microphone, dressed in a simple black dress, singing (more on that in a moment). My favourite girl, Taylor Swift, got all dressed up in a dowdy dress and pulled out her banjo to sing her bully-defiant anthem “Mean” with her usual adorable enthusiasm and Best New Artist-loser Nicki Minaj put on a crazy show that I will admit to fastforwarding through but I do think she deserved that trophy (which went to Grammy-hater Bon Iver instead, prompting the most awkward acceptance speech I’ve ever heard). Paul McCartney and Tony Bennett (with Carrie Underwood) were the other big performers of the night, and the insane reverence the celeb-filled crowd showed in the presence of the Beatle extraordinaire proved a great testament to the Gaga-less back-to-basics theme of the night…

…a theme driven home by the night’s big winner- Ms. Adele Adkins, nominated for 6 trophies and set to perform for the first time in months since her surgery last fall. The superstar set about conquering the Grammys last night (having won 2 for her previous album 19– Best New Artist and Best Female Pop Vocal), first of all, by looking insanely beautiful with coiffed hair, her signature retro makeup and two different stunning black dresses (the first, more showy; the second-  more Kelly jealous-making). Then the awards started raking up until she’d completely swept all 6 of her categories (Best Solo Pop Vocal, Pop Album, Record of the Year, Song of the Year, Album of the Year and Best Short-Form Music Video- the last being the only one I’m not sure was a surefire win).  But the highlight of our night with Adele came when she finally took the the stage after that painfully long hiatus. All night we’d been watching “performers” but when Adele took to the mic we were finally watching a singer, a point she proved by starting effortlessly acapella. “Rolling in the Deep” is a massively hard song to sing- one of the hardest I’ve heard- but Adele shattered it, barely seeming to need to draw breath before sending the chorus to the rafters. Sound aside, she looked a little uncomfy to start out but her trademark sass started to permeate as she sank into the performance. Anyone who thought she might return from medical leave not up to her former standards were given their moment to crawl away in shame as the (generally massively talented/famous in their own right) crowd stood in exuberant applause for so long that they weren’t even slowing down when we finally cut for commercial.

The other awards went to mostly predictable winners, including Lady Antebellum for Best Country Album, wins for both of Kanye’s big 2011 projects and the obvious Book of Mormon for Musical Soundtrack. Betty White beat out Tina Fey in the spoken word category (really? no Bossypants love?) and Louis CK (who else?) took home comedy album. Foo Fighters picked up 5 trophies, Amy Winehouse’s predicted posthumous win for her duet with Tony Bennett came true, Taylor scored a Grammy each for performing and writing “Mean”, and even Chis Brown took home the R&B Album trophy. Most of that happened offcamera, though. We were so busy watching performances that it was barely noticeably how very few awards got air time.

After the show, some of my more music- inclined Facebook friends were all sorts of up-in-arms about the winners, but I make no claims on music sophistication and thus am as pretension free as I can get about it (we’ll talk after the Oscars, that’s when you’ll hear me up-in-arms). I love Adele and couldn’t have been happier to see her sweep. I’m also fond of Foo Fighters not because of their music but because I think Dave Grohl is a cool dude who does it for the love of it- and that’s the whole point. I’m fond of Adam Levine and Blake Shelton, I’ll admit it, because of The Voice. I love Taylor and Kelly Clarkson and don’t have a real reason to backup my dislike of Rihanna so I’ll keep quiet about it (though I will point out that my extreme dislike of Gaga came in handy this year as she barely appeared on screen at all). The winners may not have been particularly inspired but the show was a rollicking good time so I’ll take it as it was, thank you very much.