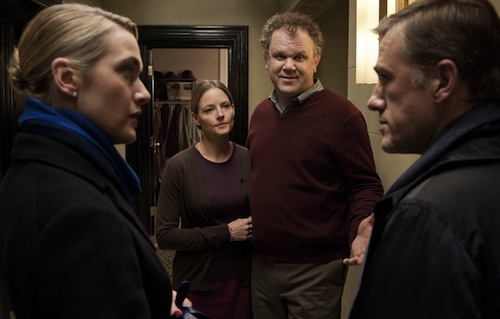 Why Grownups Suck (or, Polanski’s “Carnage”)

It would be very easy to hate Carnage, Roman Polanski’s simple but searing adaptation of Yasmina Reza’s Tony-winning play The God of Carnage (or, Le Dieu du Carnage, really). The characters are so dreadful, so maddening, so obnoxiously self righteous that I wanted to hurl things at the screen. But about halfway through, I finally figured out the film’s attitude towards its characters. Most of the time when I hate a character, specifically a self righteous one, I’m alone in that opinion, perhaps joined by a few cynics on the internet. Most films love their characters, trumpet them, revel in their goodness and celebrate the complexity brought on by their flaws. And while I thought that was the case with Carnage, it was incredibly difficult to like the film. But once I learned to appreciate the film as a criticism of the inherent despicable-ness of human beings, I, oddly, began to love it. The characters in Carnage are “respectable” folk who present themselves well, but put a little bit of pressure on them and the cracks show the pathetic, whimpering, neurotic, selfish and downright cruel tendencies underneath.

Jodi Foster is particularly wonderful as the most horrible of the group. In a confrontation between parents of schoolyard fighters, Foster plays the mother of the “victim”- paired with John C Reilly as an affable-meets-threatening average dude (here more affable than threatening; I can just imagine what effect Tony Soprano must have had in the role on Broadway). Foster’s character is the preachy, know-it-all of all my holier-than-thou nightmares, a character so sure of her sense of what is true that she honestly believes cobbler is a cake just because it is most definitely not a pie. Her kid got physically hurt (which is horrifying, I will grant her) and that is every bit of story she is at all willing to hear- there will be no explaining, no empathizing, there will simply be an apology towards the wronged and, presumably, karmic atonement of some kind. Insufferable.

Christoph Waltz (here, horrifyingly, playing the closest semblance of a “good guy” I’ve seen from him) delivers his best performance since Inglourious Basterds as the rhino-skinned workaholic father of the kid who hit the other kid with a stick. He’s cold, he’s harsh, he’s mighty pathetic when his cell phone is in peril and he’s pretty darn fabulous. His “better half” is a buttoned-down and soon-to-come-unhinged Kate Winslet having what looks like a blast judging, rumpling, puking and screaming her way through her defense of her kid (excluded and bullied by Foster’s kid, hers is the “misunderstood” “sociopath” whose parents can’t decide what adjective suits him best).

As they judge each other, accuse each other, torture each other and angeringly refuse to allow themselves escape, these 4 monsters unwrap every horrid adjective the average person might possess and place them on the coffee table alongside puke-stained art books (all the while convinced that they each are right and the others are all horrible). Carnage is a comedy of disaster wherein the catharsis is in the audience’s collective desire to fling popcorn at these heathens. Even as that unsettling feeling of “crap, am I that defensive and horrible?” begins to creep over you, it’s fun to hate on these people, it makes you feel better somehow. And with Polanksi’s final shot (one of only 2 outside that claustrophobic hellhole of an apartment), he shows us that this is really just an adult problem. The kids are over it; because, in pretty much every possible way, they’re better than the grownups