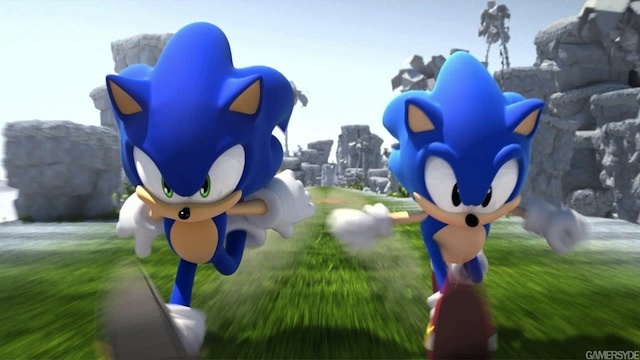 A lot of things can spark our memories; smells, textures, songs, pictures, and even taste. It’s like a small time capsule exploding in your face, bringing old memories rushing back to the surface, both good and bad. When I played Sonic Generations, it felt as if I had jumped 19 years back into the past and landed in front of my old TV with Genesis controller in hand. The bad guy needed to be defeated, and all I had were my twitchy reflexes. Sonic Generations manages to recapture the simple joy I experienced as a child, and bring it back full-throttle, in a way only Sonic the Hedgehog can.

Sonic Generations‘ plot is a basic one, but effective in its simplicity. Classic Sonic and Modern Sonic are minding their own business when a giant black entity (one that is very similar to the Ink Blot from Epic Mickey) swoops down and makes a mess of things through rips in space and time. The two heroes must then team up, racing through classic and modern variations of their levels in an attempt to restore order to their world. And that’s about it. No crazy plot twists, no difficult moral dilemmas, and no convoluted back stories. This game is about pure sonic-speed, testing the limits of your reflexes as well as your memory. You move along a Sonic timeline, playing through stages that he first appeared in at the beginning of the game, and playing through recent games’ levels toward the end. Generations is populated with nostalgic throwbacks to Sonic incarnations past, including levels, enemies, and especially music. As a result, nostalgia becomes a major selling point for the game, which takes on the feel of a Sonic compilation. While some may find this to be a bit lacking in substance, a return to a more simplistic premise may be good for the Sonic franchise. A return to a focus on gameplay mechanics and playability will help build a firm gaming foundation on which to build in the future.

Sonic the Hedgehog has been part of my gaming experience since early childhood, camped out in front of an old tube TV, eating Cheetos and drinking YooHoo (the combination remains tasty even today). Zipping around as a pudgy blue hedgehog through chemical plants and ancient ruins was both immensely enjoyable and oftentimes hilarious. And there were times when it was mind-bogglingly frustrating. (Drowning for the umpteenth time in the Chemical Plant Zone wears you down after awhile.) Besides that, the rich colors and upbeat music always kept you coming back. Sonic Generations plays on that wonderful sense of nostalgia, reminding the player what it was like to have an objective as simple as moving to the right on the screen as fast as you can. After more than a decade, Sonic Team has reintroduced a more dedicated side-scrolling aspect to its Sonic games, starting with recent Sonic Colors and followed by Generations. Classic Sonic will handle very much like he did in his Genesis days, from spin dashes to flying with Tails. Modern Sonic retains his boost abilities and homing attacks, as well as the three dimensional aspect of level progression. Many old enemies and allies make an appearance as well. Of course, Dr. Robotnik makes his appearance, with quips and one-liners reminiscent of 90’s TV shows. You can challenge your rivals- Metal Sonic, Shadow the Hedgehog, and Silver the Hedgehog- to one-on-one duels representative of the game they first appeared in. For example, the fight with Shadow is a revamped version of the final duel in Sonic Adventure 2, music included.

Happily, this isn’t the only music that gets some re-touching. The music for older Sonic stages has been remixed and re-mastered, all while staying true to the original melodies. Classic tunes are redone to match the modern audience’s view of Sonic as the happy-go-lucky freedom-loving hedgehog. The music is upbeat, and most importantly, catchy. (I played the City Escape level more than any of the other levels, just because of the music.) Unfortunately, some of the newer original music lacks some of the catchy appeal of earlier themes. While not bad songs, they aren’t as memorable, and don’t evoke the same emotions as their predecessors.

Sonic Generations’ plan to capitalize on the nostalgia factors does well in bringing in old Sonic fans, while still offering something to the new fans. However, one may question the originality of the game, accusing it of relying too heavily on ideas and themes it has already done. There are several ways to look at it. One can adhere to the idea that you shouldn’t fix what isn’t broken. If it’s a good idea, what’s wrong with continuing it? On the other hand, games will get stale and lose the individual flair that set them apart from other games. Generations has moved toward the former, adopting a style of gameplay more closely resembling older titles, with a focus on platforming rather than storytelling. In doing so , it may sacrifice some originality, but it makes up for it with fun and engaging gameplay.

Sonic Generations isn’t all about the music or the nostalgia, however. Like all games, its gameplay mechanics must be tried and true in order for it to be considered a great game. Unfortunately, despite the happy childhood reminiscences, there are still a few things that are hard to handle in Generations. First of all, it does a magnificent job capturing Sonic’s speed, showing him displace the air itself and distorting the background by moving so fast. However, this speed becomes a handicap in playing through for the first time. There’s really no comfortable middle ground between a slow crawl and breaking the sound barrier, and most gamers tend to want to go full speed when they can. As a result, you tend to miss a lot of alternate paths on your first playthrough, as well as stumble a lot on obstacles. It eventually comes down to playing a level enough times until you get to the point where you remember where those key jumps are.

Thankfully, the level designs are very replayable, making it so that most gamers will play through the level more than once, especially if they’re aiming to find the Red Rings and get bonus material. (Also, the Red Rings in this game undergo a huge improvement over Sonic Colors; in-game characters give you hints as to where you can find them, unlike having to either get lucky or consult an online guide for their whereabouts). However, the problem of going too fast is still present here and there; smaller objects and goals tend to pass you by before you realize what’s going on.

Next, the jumping mechanic could use some refinement. When playing Sonic 3 for Genesis and Sonic Adventure 2 Battle for Gamecube, it felt that Sonic had a distinct “weight” when being controlled. “Weight” meaning that the controls were responsive in such a way that the sensitivity of the joystick’s movements was comfortably represented by Sonic’s actions. Tilting the joystick slightly left didn’t send Sonic shooting off in that direction, rather it gave the player time and space to make small adjustments and nail his jumping as well as his landing. While Generations has a tight control scheme overall, Sonic seemed a lot “lighter” in this game, and it was tough controlling his mid-air movements effectively. It can be hard to predict exactly how Sonic will land after you’ve jumped, and how quickly he will be able to jump again after he’s landed. This situation mainly cropped up in Classic Sonic levels, which usually had more platforming elements than the Modern Sonic levels. Since Classic Sonic doesn’t have the boost ability, you are unable to compensate for a short jump by boosting the extra distance. While not an enjoyment-crushing issue, it still felt frustrating from time to time trying to nail the jumps. Then again, compared to all the impossible jumps in the Chemical Plant zone in Sonic 2, all this takes is a little bit of practice. And a lot of YooHoo and Cheetos.

One more thing to address before the final verdict; it has been said that this game runs on the short side, and that 50+ dollars for a short game fueled mostly by nostalgia might be a little much. It’s also been said that this game is a cop-out, merely rounding up different Sonic themes and releasing them as a compilation. It’s true that Generations doesn’t attempt anything groundbreaking, rather it sticks to a formula that it knows can work. While the main plot is brief (able to be beaten within 3 hours), the huge selection of extra missions ensures that you will still have more to do after finishing the main story. You can race your double, aim to collect the rings, or you can perform specific challenges such as completing a spike-laden course with sporadic invincibility boxes as your only means of survival. While they may get repetitive after a while (Please, no more treasure hunting with Knuckles!), the extra missions do add a lot of replay value to the game. When playing these missions, it’s helpful to abandon the “this will add substance to the story” attitude and replace it with “I want the new high score” attitude. Which is more appropriate for a game driven almost completely by speed.

Story: 8/10 – While Sonic isn’t known for its stellar plot, something still felt missing from its delivery. The simplicity of the plot is still satisfying, though.

Graphics: 8/10 – Not the most high-tech of graphics, but Generations really manages to capture the vibrant colors of earlier Sonic games. However, seeing those colors move at Warp 9.9 can make you pretty dizzy.

Sound: 9/10 – Wonderful re-mastery of all the old songs and sound effects will bring a smile to the lips of many older fans. Newer songs don’t feel as strong, but they’re still fun to listen to.

Gameplay: 8/10 – Sonic Colors was when the control scheme for the Sonic games started to improve, and Generations has built on that. All the controls need now are some fine-tuned adjustments in order to give the player tight control of Sonic’s movements.

Replay Value: 9/10 – Each time I completed a level, I went back and did it again to see if I could shave a second or two off. The levels are simple and not intimidating, making it easy to revisit them again and again.

Sonic Fans, buy this game for yourself for a quick trip back to your childhood. Players who aren’t as devoted to the Sonic franchise, wait for the price to drop a bit before you check this one out. While a solid platformer, it takes a little getting used to, but is still very useful as an introduction to the series. Either way, play this game at some point and hope that the next games will continue to improve on the Sonic gameplay mechanics, just as this one has.