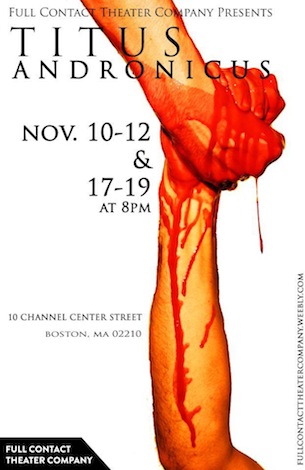 I never turn down a Shakespeare play. In fact, a while ago I had a weekend full of Shakespeare. Back in November, I was ecstatic that a new company emerged in the Boston theatre scene, and I was excited to check out some of Commonwealth Shakespeare’s interns and actors at work. Full Contact Theatre presented a lively reimagining of one of Shakespeare’s bloodiest plays, Titus Andronicus.

My favorite part of the production was use of a “found” space; the play was performed in a seemingly abandoned warehouse in South Boston. The lights, drawings on the wall, visible cables, and garbage sculpture were unique touches to this production’s modernization. The technical elements were minimal and stripped down, reminding me that I was watching a play; I can’t decide if this choice was artistically brilliant or economically frugal. The production team made lots of  very innovative choices for the classic play, including the coordination of music and lights, but I found the lights projecting onto a white sheet to form shadows of the actors to be the most effective and artistically interesting.

I can’t say that the actors were as interesting. While William Schuller’s Titus was dynamic, and Schuller made bold acting choices, I thought he was whiney, over-the-top, and lacking some of the grounding of a war hero. Schuller seemed almost unbalanced from the beginning of the show, and I didn’t have any sense of who Titus was before the play’s tragic events. Perhaps even more disconcerting was Saturninus, played by Lucas Griswold, who just seemed like a bad guy; did no one in Rome realize how awful and slimey a person he was? But the most troublesome was Aaron, played surprisingly by Hillary Asare. I was in awe of the brothers’ physicality onstage- Chiron, played by zany Will Hirschfeld; and Demetrius, played by Chris Cohen. Hirschfeld was literally unstoppable onstage. I’d have been more impressed if I could’ve focused on the action in the scene without wrestling, portraits, and a Gollum imitation.

Luckily, I found Sasha Kraichnan’s Tamora captivating; this actress is not to be missed in future productions. She had a superior command of the language and her character, and she never failed to impress me. Equally impressive were Sarah Gazdowicz’s Nurse, and Ashley Gramolini’s Young Lucius. Both actresses created physically interesting characters, especially since they both play another key character in the play.

I look forward to future productions by the Full Contact Theatre. They live up to their name of providing provocative and forward-thinking theatre. I hope they continue to explore classic works, and I hope their talent pool grows to accommodate their unique concepts and productions.