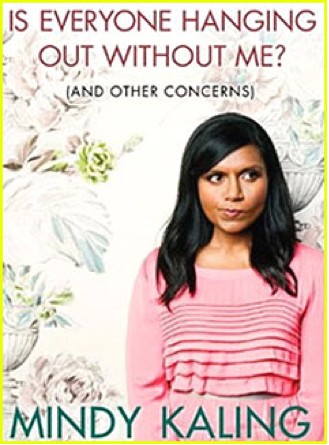 “Is Everybody Hanging Out Without Me?”

If you watch NBC’s The Office, you already know Mindy Kaling. Or to be more specific, you know her on-screen counterpart: Kelly Kapur. And maybe you think that Mindy is actually Kelly, and therefore assume that Mindy is obsessed with weight loss, boys, and shopping. But you’d be wrong. Mindy is obsessed with weight loss, boys, shopping and COMEDY.
Oh what a difference a word makes.

I recently drove from Springfield, Massachusetts to Los Angeles, California. Along the drive, I took Kaling’s audiobook version of Is Everybody Hanging Out Without Me? (and other concerns). And, I’ve got to say, Mindy was about the second best traveling companion a girl could ask for.

Is Everybody Hanging Out Without Me? (hereinafter referred to as “Mindy’s Book” because the book, and especially the audiobook version of it, tricks you into thinking that Mindy is your new best friend, and she was just talking to you for four hours straight about all the highs and lows and crises of self confidence that led to her being the fantasticly dressed, whip-smart writer on NBC’s The Office) is a not-too-detailed look at the life and joys of Mindy Kaling. But since Mindy is not a war hero, nor a grizzled octogenarian, nor Snookie, her life hasn’t been particularly dramatic. What brings life to the book is Kaling’s delightfully irreverent voice, her knowledge of just how blessed/hard working she is, and her desire to illuminate it all in a voice that sounds kind of like the best NPR segment you’ve ever listened to.

The book starts with an admission: Mindy is not Tina Fey. Is Everybody Hanging Out Without Me?  is not Bossy Pants, a book that had a clear thesis and a desire to go in depth about what it meant to be a woman in comedy, and a woman at the height of her career willing to tell her tale in all its awkward glory. But Mindy Kaling is also a woman of comedy, albeit a woman at a different point in her career, and from a later-than-Tina part of her generation (I think Mindy is actually trapped between Generation X and us Millenials). Her rise from unemployed denizen of New York City to off-broadway Ben Affleck impersonator to the writer’s room on The Office to the Indian chick with the high pitched voice is only a part of her journey, but listening to it and all her regular girl woes is a fun trek.

I’m not going to spoil a lot of her jokes and stories. Mostly the book is a calvacade of wit and charm that slides by on an avalanche of good will and chatty panache. I did particularly like the section where she talks about leaving her childhood clique to embrace the weirder sides of her personality, and her exultation to young people to work hard (while not exactly novel) was on the right side of the scolding/encouragement divide. As a first publication, Mindy’s book proves she has a great voice and a deep wit hidden under that weight-talk and fashion woes, and I look forward to continuing to follow it as she moves further up the ladder.