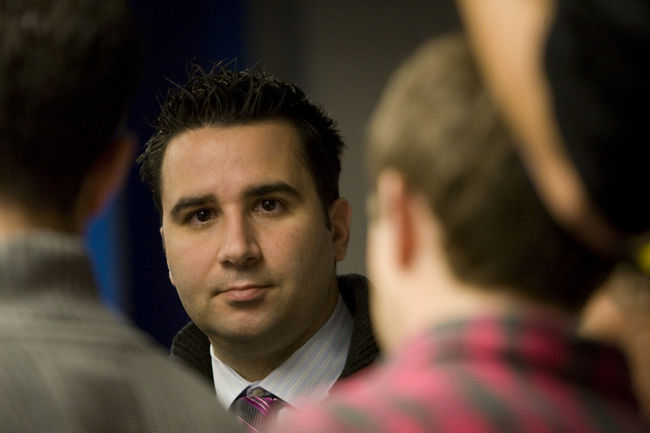 Sometimes over-thinking can lead you to make mistakes. Certainly it does on multiple choice exams and it may have been the culprit in the two major trades Alex Anthropoulos, GM of the Toronto Blue Jays, made last summer. These trades paid no immediate benefit to the Blue Jays last season but significantly helped Arizona to get to the playoffs and St. Louis to win the World Series. The fact that these trades are still costing the Jays money and holes in their lineup is further proof that sometimes too much analysis, research and thinking can be a bad thing.

Let’s recap the two trades in question. First, there was the three team trade that involved reliever Jason Fraser and minor league starting pitcher Zach Stewart going to the Chicago White Sox for starting pitcher Edwin Jackson and third baseman Mark Teahen. Jackson was then immediately dealt to St. Louis Cardinals along with Octavio Dotel, Cory Patterson and left handed reliever Mark Rzepczynski for outfield Colby Rasmus and Brian Tallet, a lefty that they released after having him pitch once. At first when you look at the trade you say, wow, what a steal for the Jays. They gave up nobody for a potential 5 tool centerfielder. And in some ways you would be right. None of the players the Jays gave up were house hold names, and except for Rzepzynski, none of these players were in the Blue Jays long term plans.

The problem is that when we talk about Rasmus we talk about a person who for three major league seasons has not fulfilled his supposedly 5 tool potential. The scouts say that he has unlimited upside but in three years in the majors he has a .251 batting average, .322 on base percentage and a .754 OPS (on base & slugging percentage). For reference, a player isn’t really considered a star unless his OBS is over .800. Sparky Anderson, The Hall of Fame manager always said that you never really knew what you got in a ball player until he has three years of experience at the major league level. Well I guess Colby has a ways to go to reach his so-called potential. What is worse than Rasmus not fulfilling his potential (and he most likely will not), is the fact that he is taking up space in the outfield for some of the Jays’ really good young outfielders. Eric Thames and Travis Synder need playing time in the Big Show to show what they can do. We already know what Rasmus can do but unless these young players are given a real chance to produce the Jays may give up on them and get little in return. These young players, in the short time that they have played in the majors, have shown a real passion for the game, something we saw very little of from Rasmus last year.

What makes this trade even worse is that the Jays will be very hard pressed to replace Rzepczynski. Good left hand specialists out of the bullpen are very hard to find, but to make matters worse is he is young, under the contract control of the team for another 5 years and is only going to make ½ a million dollars this year. To replace him, the Jays went out on the free agent market and signed Darren Oliver, a 41 year old lefty, for 4 million. And since we are talking dollars, they released Mark Teahan and are responsible for his 5.5 million dollar contact. As well, they signed Rasmus for 2.7 million. Add that up and the trade cost the Jays over 10 million this year and they don’t even need the guy. Anthopoulos, in his quest to find an underperforming superstar with a potentially high upside, has paid a steep price. Too much thinking, I would say.

The second trade involved sending Aaron Hill and John MacDonald to the Arizona Diamondbacks for Kelly Johnson. Again, Anthopoulos got caught over-thinking. His thought process was that he did not want to honour Aaron Hill’s club option next year for over 8 million dollars. He thought if he traded for Johnson there was a chance that Johnson would be classified as a Type A free agent and when he signed with another team in the off season the Jays would get two draft picks. Draft picks are something Anthopoulos loves to accumulate. In theory, this thought process looks good, except things didn’t unfold like he thought they would. Johnson did play well enough to be classified as a Type A free agent but no team valued him enough to sign him as a free agent and the Jays were forced to sign him for over 6.5 million. Arizona, on the other hand, declined the club option for Hill but then resigned him for around 5 million. Once again the Jays got caught holding the wrong player. Performance-wise there isn’t much that differentiates the two, but when you throw in the fact that Johnny Mac re-signed with Arizona, it left a big utility hole in the infield to fill and the Jays have been forced to trade and sign a veteran free agent in the hope that they can fill the void left by Johnny Mac’s departure.

For the most part Anthopoulos has done a commendable job with player personnel, both in trades and drafting but I think these two trades show that some of your best thought out plans blow up in your face. Saying that, I guess we are still better off with him as the Blue Jays GM than J.P. Ricciardi. Now he is someone we could write a book about. Oh I can’t, Moneyball has already been written