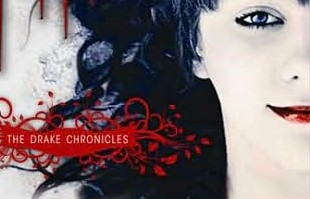 We Recommend: The Drake Chronicles

If there’s one thing we’ve learned from Hunger Games fever it’s that YA readers were desperate to move on from the Bella Swan heroine model. Feminists, hipsters and tween girls alike have flocked to the stubbornly flawed but undeniably kickass Katniss Everdeen like she was a breath of fresh air; which, after years of a Twilight-ruled landscape, she was. But for vampire lit fans, a suitably strong leading lady has been sadly harder to find (they’re out there, they’re just not as famous). So we thought we’d help you out, point you towards our favourite cast of smart and capable girls living in a young adult fantasy world (yes, a whole cast of them). Actually, come to think of it, we’ve been missing some great heroes too; of the un-dead but still non-creepy variety, that is (and some living ones thrown in for good measure). And deep mythology with a sense of history and tradition, building a distinct world and a new kind of lore on top of the existing myths . And fun narrative voices with just enough self-aware snark to overcome some of the genre’s sillier tropes. Oh I give up, there’s all sorts of goodness in Alyxandra Harvey’s teen vampire series The Drake Chronicles, I’m not going to bother choosing an angle.

Each book in the 6-part series (book 4 comes out in North America this month, it’s already out in the UK) is narrated by a pair or trio of different characters from Harvey’s well-populated world and explores the action of a dramatic couple weeks in the fictional town of Violet Hill from a new perspective.

The first installment, “Hearts at Stake” (or, the far superior title, “My Love Lies Bleeding” in the UK) is from the perspective of the series’ breakout character- the indefatigable Lucy Hamilton- and her best friend Solange, who happens to be a vampire (Lucy’s not, but she fails to see that as problematic). Solange is the youngest child in the ancient Drake family and the only girl in centuries. In Harvey’s complicated mythology, a vampire can be born as well as made, and that’s what Solange is: born into a vampire family and set to undergo the “blood change” when she turns 16 (forced to abandon chocolate cake forever). Headed by Solange’s fantastically combative mother Helena and her peacefully diplomatic father Liam, the Drake family is vampire royalty and Solange, as the only girl, is heir to the throne. Complications ensue.

“Hearts at Stake” is loosely based on a Snow White concept, but instead of 7 helpful dwarfs, Solange has 7 hot brothers (what? this is YA after all) to help her through the traumatic change to vampiredom she’s about to face (not to mention the marriage proposals/kidnapping attempts by the series’ power-hungry villains). All those brothers have recently gone through the change themselves, so they’re all armed with such wonderful romance tools as powerful pheromones and the ability to tell when a girl’s heart starts beating a little bit faster, helpful since they’ll be heading up the love stories from here on out. Solange has a love interest too- nice local boy named Kieran Black, who inconveniently happens to be a vampire hunter looking to avenge his father’s death- but the romance to talk about in book 1 is between lifelong Drake hanger-on Lucy and the youngest of Solange’s older brothers, Nicholas. By the end of the 3rd book, there are already 4 couples in the mix, but Lucy and Nicholas will always take the cake with their wonderfully comfortable banter and her fantastically character-true defiance of his protective instincts.

Protective instincts that come in handy, as it turns out, as human Lucy is in pretty much constant danger through the series, not only from villains like the vicious reigning vampire monarch Lady Natasha, social-climbing beast Montmartre, his equally bad-news lieutenant Grayhaven or the corrupt agents working within Kieran’s anti-vampire league Helios-Ra (the rest of them are good and treaty-friendly, there’s just a bad seed or two). Lucy also has to fear the killer instincts of her friends and protectors The Drakes, no matter how good they are, they still have to battle their hunger whenever she’s around: a concept the family, and especially Nicholas and Solange- those closest to Lucy-, are painfully aware of but Lucy refuses to truly grasp herself. As our conduit into the world of complicated vampire tribal politics and age-old bloodlines (each novel begins with a simplified Drake family tree for reference, the more complicated one is added at the end of this article), the big-mouthed free-spirit is the key to the Chronicles as well as Harvey’s standout character.

The brothers themselves are a wonderful mix of diverse personalities who, more often than they would admit, think and act as one when it comes to protecting their little sister, their family name or each other. After Nicholas, in ascending order of age, there’s Logan, the old-school poet of the lot and the co-narrator of book 2, “Blood Feud”. He comes to the forefront of the story when he falls for one of the series’ most fascinating characters- Isabeau St. Croix, a French Revolution survivor and member of the mysterious vampire tribe known as The Hounds. Amidst the sarcastic wit of Lucy and the Drakes, Isabeau stands out for her quiet intensity and the haunted weight of living hundreds of horrific years before any of her “peers” were born. While Logan’s narrative continues “Hearts at Stake”‘s political story and carries most of the romance, many of Isabeau’s chapters are flashbacks wherein Harvey paints vivid pictures of Isabeau’s historical struggle for life and eventual death at the hands of a vampire she’s now determined to hunt down. The stretch back into one of world history’s bloodiest political upheavals is the perfect counterpoint to the Drakes’ current quest for peace amongst the vampire tribes in what is possibly the best-plotted book in the series.

Book 3 changes the focus, calling up Drake brother #3- the ladies man Quinn- and shining the light back on Helios Ra where Kieran’s lifelong friend Hunter Wild is training to be Buffy (for lack of a better comparison). Now that things have mostly settled down at the Drake compound after the compact action of the first 2 books, “Out for Blood”‘s narrative baubles between Quinn and Hunter, focusing on a mysterious illness that’s spreading among the Helios Ra students and an increase of attacks from Hel-Blar, a feral vampire breed who smell like mushrooms (authorial anti-fungus prejudice, clearly). It’s the series’ most grown-up romance yet; Hunter being a rare human girl who’s actually hesitant about loving a vamp, it’s full of push and pull and inner turmoil more so than the Solange-Kieran, Lucy-Nicholas, Isabeau-Logan hookups.

“Out for Blood” also expands the world of Helios Ra in really great ways. While the first 2 books explore Harvey’s dense mythology through the eyes of the Drakes (Solange, Logan), the Hounds (Isabeau) and a Drake-loving human (Lucy) as the battle for the vampire throne, Solange’s blood change and the treaties between tribes are untangled, “Out for Blood”‘s Hunter narrative gives the series’ first true outsider perspective (Lucy may be human, but she’s as inside as you can get without actually being a Drake). What we know second hand about Helios Ra from Kieran’s contribution to “Hearts at Stake” is expanded as we enter the vampire-hunting world more fully. The fight for competitive edge, the ingrained prejudice and attack instincts, the militaristic sense of duty that permeate the Helios Ra academy are revealed through the sympathetic over-achiever and her great ensemble of (*hope they return in future books*) friends, my favourite being occult expert/surfer boy Spencer whose book-ending arc leaves me desperate to know what happens to him.

With little more than cameos from beloved Drake characters (Lucy gets 3 scenes I think, Logan less than that, Liam barely exists), Harvey brilliantly uses “Out for Blood” to expand the world of The Drake Chronicles to people who exist alongside but not because of the Drakes, setting up a sense of scale heading into the second half of the series. With brothers Connor, Marcus, Duncan and Sebastian still largely unexplored (not to mention Helena and Liam, quirky Drake relatives Geoffrey and Hyacinth, Hunter’s posse of friends, the Helios Ra higher ups, the rest of the Hounds and the other vamp families), there’s still so much left to discover through the Chronicles.

Book 4, “Bleeding Hearts”, is a return to Lucy’s quirky narrative alongside her big-city cousin Christabel and Quinn’s tech-head twin brother Connor.  It’s already available for download and hits bookstores in Canada next week, in The US on December 20th. If you buy the hard copy you also get the free bonus short story about Drake parents Liam and Helena.

The whole series has a complexity and grounding that its truly silly branding hopelessly undersells (the taglines and North American cover art are particularly bad). But if you hold fast through some of the more annoying genre-imposed superficialities (the demographic-chasing marketing, some overly giggly romancing), you’ll find in The Drake Chronicles a rich world fully worth diving into, no matter how old you are.

A bind-up of the first three Drake books called “Ruling Passion” is also available. Harvey’s other novels include Haunting Violet and Stolen Away (out this month) as well as the just-released poetry book, Briar Rose (due in The US in January). Head to alyxandraharvey.com for more details and check out Alyxandra Harvey’s guest article on our sister site My TV.

Originally Published: Dec 5, 2011
Update: Bleeding Hearts, the fourth installment of  “The Drake Chronicles” is now available for purchase online and in stores in Canada and the US (as well as the UK). Buy the print edition for the extra Liam and Helena short story.