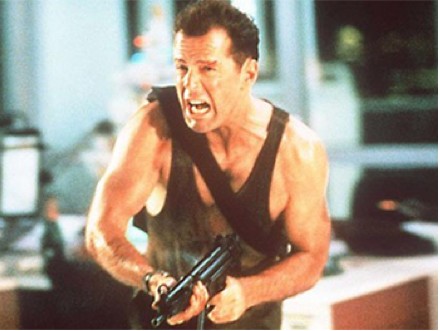 One of my non-obnoxious Film Studies TAs was struggling to explain to us the basics of plot. We were first year film students, dying to do avante-garde and unique things, and the idea of using standard structural elements to construct our opuses felt confining and uncomfortably like selling out. Then, she walks in one day and puts on Die Hard. For the next two hours, she presented Die Hard to us as a master class in plot development.
Needless to say, I now think Die Hard is pretty much amazing. It’s a masterwork in quiet characterizations and blunt, effective story telling, and Bruce Willis has never been better than he is playing the damaged McClane. And there’s really nothing more Christmasy than fighting terrorists*

Die Hard follows the story of John McClane, a New York City cop visiting California to see his estranged wife, Holly, and kids. He decides to surprise her at her office, and while cleaning up in the bathroom, inadvertently manages to hide from the Scandinavian terrorists taking over the building. These terrorists are led by Hans Gruber (Alan Rickman) who is at turns menacing, genteel, and maniacal.
The terrorists are not really terrorists; they’re thieves, and they would like to steal from Holly’s firm’s corporation.

In a way, Die Hard is a grown up Home Alone. Alan Rickman is Joe Pesci, Bruce Willis is Macauley Culkin, and Holly and all of her coworkers are the McCallister’s house. It’s all in the name of Christmas, and bringing his family back together. Along the way, Kevin/John McClane has to lay a series of traps, outsmart the bad guys, and crawl around using the absurdly serendipitous tools at his disposal. I’m not sure who Carl Winslow’s Sergeant Al Powell is; maybe the creepy, semi-homeless guy Culkin befriends. Our hero even maintains his sense of whimsy, like Kevin using the old gangster movie to trick the robbers, or McClane putting a Christmas hat on and painting “Now I Have a Machine Gun Ho Ho Ho” in blood on a dead robber’s sweatshirt. Now, Kevin may never have killed the robbers by hitting them in the face with a gun and then throwing them down a flight of stairs, but I bet he would have if he’d had the training. Gruber tears apart McClane by saying he is “Just another American who saw too many movies as a child; another orphan of a bankrupt culture who thinks he’s John Wayne.” If that’s not an apt description of Kevin McCallister, I don’t know what is.

Die Hard works so well because the characters all make pretty much logical and believable decisions. John doesn’t rush in to fight the robbers with nothing but his sense of his own badassdom. He tries to contact the authorities and gets as much back up as possible. Holly doesn’t huddle in fear OR try ridiculous amounts of heroics. Instead, she works her hardest to keep people safe and comfortable inside. The generic cops may make stupid decisions (like storming the building with SWAT team members with the mistaken belief that clearly there aren’t any hostages and the dead dude on the cop car was just a “depressed stock broker”), but Seargant Al Powell remains the human face of police officer sanity.

A really great movie is one that manages to humanize every character. In Die Hard, everyone from Seargant Al Powell (whose fully-realized back story provides an emotional anchor to the film’s final act) to Hans Gruber to John and Holly McClane are full people capable of emotions, motivations and character arcs. That’s a lot to ask from an action movie with this many shoot outs.
As the conflict escalates between the Thieves, McClane and the LAPD, the sense of reality should fly out the window. Instead, Die Hard cleverly walks the realism line, at least as far as an 80s action movie can. When cheesy 80s yuppie Ellis tries to negotiate as douche-ily as possible with Hans Gruber, and earns a bullet in the head as a result, the real life consequences of all the Home Alone-style theatrics are brought carefully home.
Gruber and McClane start an epic cat and mouse game, the highlight of which is when McClane stumbles upon Gruber crawling around the ventilation ducts, and Gruber pretends he’s a hostage. The tension-riddled scene where the two talk without full knowledge of the other’s story, with Gruber trying to needle out information from McClane, is probably one of the greatest moments of relative calm in a movie full of bloody action sequences.

Of course, the ending is suitably over the top, the douche FBI guys are suitably callous, and McClane’s particular brand of stalwart heroism comes out on top, bloody, bloody top since by the end of the movie he has no shoes or shirt, and is constantly falling through glass. But, like in all good Christmas movies, McClane bucks the system that tries to keep him down, reunites with his family, and ultimately has hope for another year of overtly American badassery, all set to “Let It Snow.”

• “You’ll have to forgive Ellis. He gets very depressed this kind of year. He thought he was God’s greatest gift.”

• Die Hard is one of those pre-2000 movies where the entire plot would have to be rewritten today due to cell phones.

• Important lessons learned from Die Hard: All blond men are liars, and blond men with long hair are the worst. You should never trust somebody in a sweat suit. Don’t take off your shoes at an office party, because at some point you WILL have to walk through glass. Also, the FBI are mostly d-bags.

*I feel there may be a drinking game to be played while reading these reviews, whereby every time I describe something as “nothing more Christmasy” or “The true meaning of Christmas,” you take a shot. This game would be dangerous to your health, and I in no way endorse it.