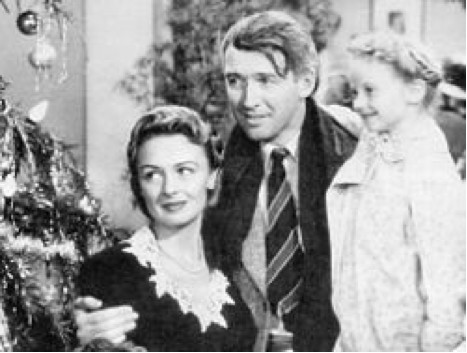 I went through a brief period in high school when I was positively obsessed with Jimmy Stewart. It was when I first started to get into older films, and I devoured Harvey, Mr. Smith Goes to Washington, The Philadelphia Story, Destry Rides Again and a bunch of other movies that starred Stewart. I didn’t watch It’s a Wonderful Life, though.
When I was in college, I took a class on Howard Hawkes that also encompassed some of his contemporaries, including It’s a Wonderful Life’s director, Frank Capra. We watched westerns, political movies, and romances, but we never watched It’s a Wonderful Life.
In other words, despite the fact that I really love everything about this movie (including Christmas, which I don’t know if you’ve noticed or not, I kind of love), I haven’t seen It’s a Wonderful Life since I was a pre-teen.

Watching it again, I am a little overwhelmed by just how lovely this movie is. At the worst times of the year, I am a sucker for stories about the inherent potency of decency. The tale of George Bailey, who went through a whole lot of tragedy while trying to do good in the world, is probably even more potent now.
At the same time, Capra’s worldview is almost painfully naïve at times. Given the adorably simple economics that power Bailey’s rise to everyman hero, it’s tempting of course to compare the Great Depression-era heroics to the modern Great Recession-era anti-heroics. But Capra’s story isn’t so much about the actual mechanics of the bank story as about the resilience of the human spirit to do good. It’s a Wonderful Life is also the only Christmas movie I’ve watched so far that has God as a character, albeit a starry nebula character.

Now to the plot, It’s A Wonderful Life is told in medias res, starting with an angel (Clarence) getting the job of saving George Bailey. Then, it quickly starts with the beginning of Bailey’s life. Bailey’s life, on the face of it, was not a big life. He yearned for one. He talked a big game about traveling the world and leaving the town he grew up in in the dust. And he worked hard for it. But every time he tried to leave, the universe (God?) stops him. He’s about to leave for Europe, his Dad has a stroke. He’s about to go to college, the evil Mr. Potter threatens to take over his business. Four years later, his brother comes home with a wife who offers the brother a way out of their town.
George, smart, kind, and compassionate George, ends up staying in town and he never leaves. The taint of that failure (in George’s eyes) follows him into his future, and even as he builds a life for himself in Bedford Falls there’s always a part of him that wonders if he wasn’t meant for something more.
When Clarence steps in to stop a Depression-era George from committing suicide, he shows Bailey what life would be like in Bedford Falls without him.

The movie is ready to show us just how big a life Bailey actually lived.
This is pure Capra. His overwhelming belief in the American ideal, even in the face of tragedy, and in the power of the righteous individual is exactly what I mean by “naïve.” But it’s also what makes It’s a Wonderful Life a Christmas classic, a stalwart reminder that despite everything in the world there’s the capacity for good and change. George’s decision to stick around and stick to his guns is what enables the goodness of the whole town to shine through.
There’s a reason that TV shows and movies alike have been stealing this plot for years. It’s absurdly moving. Who hasn’t occasionally looked around at their life and wondered if the world around them would be better without them? Who hasn’t occasionally wondered if the road not taken was the right one? But the original, by mixing Christmas and Capra and the greatest parts of the “Greatest Generation,” is profoundly moving.

By the time the hapless angel Clarence shows up and starts showing George what life would be like without him, you’re already an hour and a half in, and deeply invested in this man’s salvation. He shows him a world without one man’s goodness, and shows the incredible ways that one life can touch all the others. I dare you to sit through the whole movie and not tear up when all the town’s people we’ve spent this movie with show up to help old George out. I know I sure couldn’t.

• “Mr. Potter, that this rabble you’re talking about… they do most of the working and paying and living and dying in this community. Well, is it too much to have them work and pay and live and die in a couple of decent rooms and a bath?” The 99% should adopt this as their motto

• “You know, George, I feel that, in a small way, we are doing something important. Satisfying a fundamental urge. It’s deep in the race for a man to want his own roof and walls and fireplace, and we’re helping him get those things in our shabby little office.” Don’t you wish the people at the big banks felt this way about their jobs?

• “Why don’t you go to the riffraff you love so much and ask them to lend you the money?” awww, Mr. Potter, what beautiful foreshadowing.