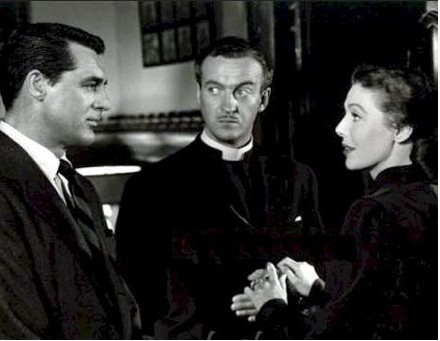 What if angels were real, and one of them wanted to bang your wife? Also… what if he looked like Cary Grant?
For my second to last Christmas movie, I wanted something I knew nothing about. I wanted to be surprised. I wanted… well… Cary Grant.

In The Bishop’s Wife, Grant plays Dudley, an angel who comes down around Christmas to answer the prayers of the titular Bishop, Henry. The Bishop is trying to get a new Cathedral built, and his desire to secure finances for the project has created distance between himself, his wife, his child, his constituents, and, not to overplay my hand here, God. Enter Dudley, who quickly wins over the Bishop’s wife, child, and everyone else in his life.

The movie plays off of Cary Grant’s movie star ridiculousness. Grant, on his most casual day, looks debonair and sophisticated, the exact type of man who bursts in out of nowhere to sweep a girl off her feet, no matter whose feet hers are normally next to. And Grant’s charm (despite its Haye’s Code-inspired on-screen celibacy) has never been of the wholesome variety, so when Dudley starts showing intense interest in the Bishop’s undersexed wife, the film knows what you’re thinking. Despite his tendency to speak in bible verse and proclaim good will towards men, when Cary Grant locks eyes on your lady, you believe he’s going to, uh, “represent YOU with your wife.”

So Grant struts around for most of the film, doing odd things to help the people around him while making googoo eyes at the bishop’s wife (Loretta Young). Like serious googoo eyes. And then, for no apparent reason there’s a fifteen minute ice skating portion in the middle. It also features an extended gag where the Bishop’s pants are stuck to a chair.

Then, Grant’s meddling gets Henry to realize he’s been taking everyone in his life for granted, and Dudley disappears. Wife and husband are back together and better than ever.

I’m not sure if it ever rehabs Grant’s playboy image, but our perception of Grant helps to play into the intriguing ambiguity at the core of his Dudley’s character. And in the end, that’s part of what rehabs Henry.

The Bishop’s Wife, unlike a lot of the Christmas movies I’ve watched, dealt directly with the ideas of hypocrisy and Christmas. Henry wants a glorious cathedral, ostensibly for the sake of his religion, God, and Jesus Christ, but it’s obvious from beginning to end that his desire for the cathedral has more to do with pride and arrogance. Their church and their Christmas may have all the outward manifestations of beauty and righteousness, but it’s formed on a bed of crumbling faith and narcissism.

It’s a critique many people make of Christmas in general, that all this frivolity, gift-giving, and shopping is nothing more than an opulent demonstration of our consumerist culture at its most shallow. As such, Henry’s descent into jealousy and materialism seem like a critique on the decadence of Christmas. But Dudley reveals the beating heart of Henry and of humanity is not about money or prestige, but about the people we love. Even the grumpy old woman who wants to turn Henry’s cathedral into a memorial for her dead husband is revealed to be an old, sad, slave to love just trying to recapture her ability to “act like a human being.” Henry goes from stick up his butt to loving husband and devoted pastor. And even Dudley gets his chance to experience the exquisite terror of loving another human (plus the righteous atheist goes to church, which I guess is the 40s equivalent of one’s heart growing two sizes).

Henry’s final sermon implores his church to remember the gift not under their Christmas tree, the gift of Jesus. And despite the Christian-specificity of such a message, it applies more broadly. It’s not as happy as White Christmas, nor as beautifully classic as It’s a Wonderful Life, but The Bishop’s Wife is one of the few movies I’ve watched to deal directly and sincerely with how to make meaning out of the trappings of Christmas, while accepting the too easy slide into materialism. The Bishop’s Wife is the exact opposite of the modern cynical Christmas films, and a parallel alternative to the wholesome “Ain’t Christmas Grand?” musicals like White Christmas. Instead, it’s a movie that takes head on issue with the darker side of Christmas and, with the unironic beauty that only a pre-1950s film can really bring, tears that darkness down.

• Apparently Angels and Murderers have the same faces.

• One of the kids playing in the snow in The Bishop’s Wife is the same as the young George Bailey in It’s a Wonderful Life. Christmas Serendipity!

• The angel has had “quite a bit of work to do in Paris.” Ha, take that Frenchies!
“I’ve never before had to fight an angel, but I suggest you take off your coat and put up your dukes!”