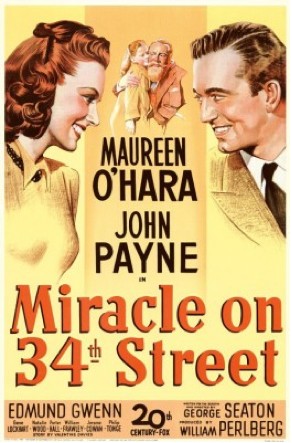 I chose the black and white 1947 version of Miracle on 34th Street not because of some pretentious need to see the original, but because I don’t think I’ve ever seen it before. I know I’ve seen the Matilda version at some point in time, so I’m much more interested in seeing how the 1947 classic holds up.

You know the plot: Kris Kringle takes over for a drunk department store Santa Clause and then ends up having to go to trial to defend his Claus-y-ness. As I said before, it kind of boggles my mind to think of the logic of this for too long (seriously, how do the parents NOT notice the extra presents?).
One of the most interesting things about watching the 1947 version is that the essential message of the film is about cynicism and faith. The 1940s and 50s are traditionally a time we look back on with a nostalgic fondness for a bygone naïve era. But here, we are meant to examine the cynicism already prevalent in 1940s America. Given how much we believe our cynicism has grown since then, it’s particularly intriguing to examine the story.
So here’s the rest of the plot, for those, like me, who only know the bare bones.

On top of the Santa Clause story, there’s the tale of Susan and Doris Walker. Doris is an executive at Macy’s who plans the Macy’s Thanksgiving Day Parade. She’s also divorced with a kid, which was apparently akin to being a leper in the 1940s. That kid is Susan (Natalie Wood, proving how ridiculous it was that she ever played a Puerto Rican), a girl so logical and straight forward that she doesn’t believe in giants, let alone one man who drives around with reindeer who fly to deliver toys to all good little boys and girls in one night. Santa Clause makes it his mission to help make Doris believe again, against all odds, in order to save Christmas. Or something.

Like It’s A Wonderful Life, this movie supports the very Christmas-y idea that doing the right thing, even when it garners bad stuff in the short term, leads to good things long term. Macy’s Santa Claus starts sending desperate parents to other stores so they can find their last minute Christmas presents. Far from hurting profits, this leads to an increased bottom line thanks to store loyalty.
An amateur psychologist proclaims Kris insane, but Macy’s decides to keep him on staff since everyone loves him. They set him up to live with Doris’s neighbor, a bachelor lawyer who clearly has eyes for Doris, and in sharing close quarters with Doris, Susan and Mr. Lawyer, Kris begins to expand their ideas of what is possible. Then, the psychologist goads Kris into hitting him, and gets him carted off to a mental institution.
Now, Mr. Lawyer (whose name is Mr. Gailey, but Mr. Lawyer is more fun) has to represent Santa in the court of law and public opinion. It’s a classic faith versus cynicism, corruption versus goodness, warmth versus cold case. And the ending, featuring grandstanding and beautiful monologues, as well as an abrupt and tear-jerking change of faith by Doris, is as hopeful and philosophical as one could wish from a Christmas movie.

At the end of the day, this movie doesn’t seriously challenge anything or say anything a thousand other Christmas movies hasn’t before (and, much more extensively, after). What it does, though, is make a case for the extraordinary. I’m pretty painfully agnostic, myself, and tend to live a Christmas that is more about family, friends, and popular culture than it is about the manger, Mary, and Jesus Christ. But that doesn’t mean that I don’t believe in what the movie calls “intangibles.” In fact, the reason why Miracle on 34th Street has remained so steadfastly popular is precisely because of its ability to fight through cynicism. It’s said best in the words of Mr. Lawyer himself, Fred Gailey: “Faith is believing when common sense tells you not to. Don’t you see? It’s not just Kris that’s on trial, it’s everything he stands for. It’s kindness and joy and love and all the other intangibles. ”

• Santa Clause in 1947 was skinnier than the average person today? That’s… depressing.

• I refrained, as much as possible, from ranting about this in the body of the review. But why the hell do all these people think it’s okay to tell Doris how to raise Susan? Oh, yes, that’s right, because she’s a woman. A DIVORCED woman. Blow me.

• Much more endearingly, the movie questions the whole idea of “normal,” and reaffirms the value of imagination.
Take THAT 99%, this movie also makes a great argument for the ways that the free market actually supports goodness.