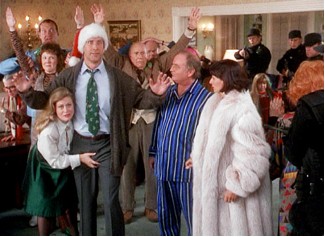 Before this project, I had never seen National Lampoon’s Christmas Vacation, a fact that inevitably elicited gasps from whomever I told it. It’s a classic, sure, but like most of the pre-Community Chevy Chase oeuvre, I somehow missed it.

So it was with great joy that I undertook the task of partaking for the first time in a movie many people consider a must-have of the holiday season.

I found it hilarious. Chevy Chase’s physical comedy skills were unmatched even before he turned into Pierce Hawthorne. And I love the bat shit 80s style of comedy where the surreal and the inappropriate mingled casually alongside the simplest of stories.

But, and don’t get too big a head about this one Mom and Dad, I found it a little hard to relate to the escalating scale of awkward family interactions that the Griswolds go through. Since only half the family ever celebrated Christmas, anyway, and since the other half all had their own homes to stay in, we never suffered through the indignity of having to cram into bedrooms to accommodate visiting relatives. And my relatives, although occasionally hilarious, were never quite as distasteful to me as they seem to be to teenage Juliette Lewis.

Even when you can’t quite understand the logistics, there’s still something great about a family working together to deal with their own strange little traditions.

In this age, when only 3 of my 13 (so far) Christmas movies have even mentioned God and none of them have been overtly Christian, the celebration of Christmas is far more about the accumulation of family and traditions. A lot of these traditions are weird or nonsensical, like spending hundreds of dollars to light up your house with ostentatious displays of lights. Or going shopping together. Or dealing with family members who you don’t particularly like. Our Christmas traditions are often goofy, ridiculous, and not nearly as adorable as we remember them, but they’re ours.

Like Chevy’s Clark Griswold, we’re all trying to create the best version of our Christmas, and even on the best years, we fail. Cats get electrocuted, turkeys get over cooked, trees get burned to a crisp. Our family members turn out to be kind of d-bags. But in the end, it’s still meaningful to hang out around the fire and listen to ‘Twas The Night Before Christmas… even if it is interrupted by a small kidnapping.

That’s maybe little high-fallutin for a movie that features an extended sequence of Chevy Chase hitting himself in the face with ceiling boards. Mostly, Christmas Vacation is a series of escalating gags and crazy characters interacting in forced Holiday merriment. And isn’t that what Christmas is all about?

• Johnny Galecki made for a surprisingly adorable pre-teen (although I did have to resist the urge to keep saying to the TV “sorry, dude, you’ll never get any taller.”)

• Was there ever actually a time when straight, slicked back hair that makes you look like a Russian bond villain was considered a good look? Dude, the Greasers called, they think your hair looks stupid.

• “I don’t know what to say except it’s Christmas, and we’re all in misery.”

• 99 % watch: “But when people count on them as part of their salary—what you did just plain sucks… I’ll be more than happy to take the blame on this, on behalf of myself, and every other family you rear ended this Christmas”;
“…I guess a healthy bottom line doesn’t mean much if to do it you have to hurt the people you depend on.”

• When I grow up, I want to be Aunt Bethany.