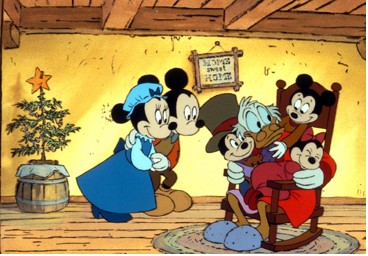 Christmas Carols are a dime a dozen. But versions, that don’t make me want to skip through half the ghosts? Well, those are much further and farther between.
Mickey’s Christmas Carol is one of those, primarily because it’s only half an hour long. Also, apparently I just can’t handle the classic story if it’s not populated with anthropomorphized animals playing the characters. I’m not sure what this says about me.

Anyway, the Mickey version helpfully condenses a story that can sometimes justify an up to 3 hour play into 30 minutes (WITH COMMERCIALS) and greatly simplifies the themes. Scrooge McDuck is a miser who loves money, and is crappy to Bob Cratchett (Mickey) and everyone. Jiminy Cricket plays the ghost of Christmas past and carries Scrooge quickly to the golightly past.
The ghost of Christmas present is The Giant from Jack and the Beanstalk (okay…), and it’s amusing to watch him struggle with lines like “it’s the food of generosity, which you have always denied.” The ghost of Christmas present is pretty much always a profound dolt, all about short sighted kindness and absentminded goofiness, but here he’s much more profoundly buffoonish.
The scary Goofy villain type guy plays Christmas Future, and he’s a lot more malicious than you’re probably used to in the normally Dementor-like ghost. Plus he smokes cigars, which is just gross.

The jokes are cute, and surprisingly witty, and the super brisk pace may cut out a lot of the nuance, but it leaves in a lot of the fun. Overall, this is far from an essential Carol offering. It turns out I actually enjoy the nuance. But it is enough to prove that Mickey and co. have the capacity to make enjoyable entertainment that can play to adults, even while it’s way better at spreading communist propaganda to children.

• Scrooge McDuck should be nicer to his nephew, Fred (Donald Duck). The poor guy clearly has serious learning problems.

• Going along with my 99% theme for these reviews, here’s a good quote for the 1%ers out there “You work all your life for your money, and people expect you to give it away!”

• How come Scrooge wears slippers, even though he never wears shoes?

• I’ll talk more about this in more substantial Christmas Carol offerings, but it always kind of seems like a cop out to me that Scrooge turns his life around after finding out about his own death. It seems like showing him that first, then building up his compassion for other people, might be the more profound route. THAT’S RIGHT, DICKENS! EDITED!