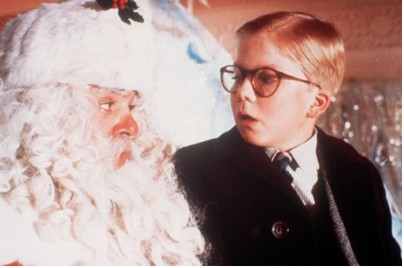 As I sit down to take in the perennially marathoned A Christmas Story, I realize that I don’t believe I’ve ever actually sat down and watched A Christmas Story before. Normally, it is on the TV in the other room all day Christmas day, and when sullen child/teenager Rachael got bored of hanging out with the relatives, she snuck into the other room to catch hours upon hours of “you’ll shoot your eyes out” festivities. I HAVE seen every moment of this movie (I think), but I’d never seen it in the correct order. Apparently, there was a plot in between the goofy snow suits and the tongue on the flagpole. Although not much of one.

The movie basically revolves around young Ralphie’s overwhelming desire for a BB gun and the series of obstacles put in between him and his goal. The movie is a solid piece of 40s and 50s nostalgia, from the warm and fuzzy voice over to the goofy clothes and “simpler times” plot. And like a lot of these nostalgia films, it speaks to an inherent duality in the way we think about childhood: even while we’re nostalgic for it, we’re also aware how fraught with drama and disappointment it was (see also: Stand By Me, Sandlot).
The movie is much more absurd than I remembered. It has more dream sequences than your average Scrubs episode. My personal favorite could be the Santa scene, in which sitting on Santa’s lap is transformed into a terrifying ordeal of tragic proportions.

The exaggerated nature of A Christmas Story, mixed with its dedication to an awkward sort of nostalgia, allows it to seem at once universal and absurd. It’s impossible not to see little pieces of your own strange holiday traditions in A Christmas Story.
Ultimately, for all its tomfoolery, it’s about the simple joys of making ridiculous holiday memories with your family, whether they be based on lying to them or having fun despite everything going wrong.

• Did any one out there hear “There’s starving people in China?” when they were a kid? It’s not inaccurate, but I feel like I always heard “India” or “Africa.”

• Although set in the 40s, the movie was clearly shot in the 80s as evidenced by The Mother’s hair.

• “The old man loved bargaining as much as an Arab trader?” Were you allowed to say shit like that in the 40s? Or the 80s for that matter?

• 99 % Watch: Ralphie thinking he’s decoding a secret mission from Little Orphan Annie only to find out it’s a commercial for Ovaltine is a perfect metaphor for the disillusionment many of us feel with politics these days.

• I’d complain about the random racism of the Chinese Food Restaurant scene, but a) it was the 80s and racism hadn’t been invented yet and b) it was funnier than a season’s worth of 2 Broke Girls.