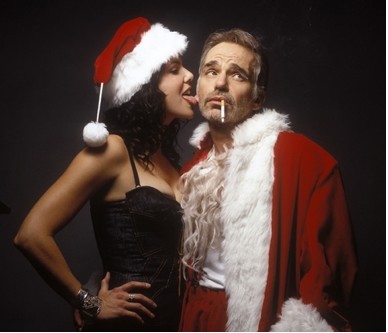 From the first moment of Bad Santa, the film is fully defining its viewpoint. Billy Bob Thorton, looking alcoholic skinny with a cigarette in his hand and a Santa suit hanging angrily off his lanky frame, provides voice over narration to a scene that is set at a bar and which ends with Billy Bob Thorton puking. All the while, overly sincere Christmas music builds to a glorious crescendo. In the course of the monologue, Thorton lays out just how messed up his titular Bad Santa is, talking smack about children, exploring his crappy upbringing and tendency towards crime, and showing how misanthropic and angry his character is. By the time (five minutes in) we watch his little person companion run around in a snow man suit and help Thorton to rob the department store, we’ve pretty much established just how far this movie lives from your usual “love and good tidings” Christmas fare.

If the movie’s only joke was pairing cheery Christmas movie iconography with really, truly deplorable behavior, it would get old fast. But it’s much more interested in exploring the depths to which Thorton’s Willy has fallen to, and that kind of humor is funny at any time of the year. Or not.
By the time you’re watching the way-too-smart-to-be-playing-this-character Lauren Graham screaming “f— me Santa” at Billy Bob in the backseat of a car, you already know whether or not you can like this movie.

It gets a lot better after that, but if you can’t deal with the first set of jokes then you can’t deal with the rest of it either and should probably just turn the TV off and go watch The Christmas Shoes (starring Rob Lowe, natch!).
I personally have a ridiculously high tolerance for stories about shitty people saying awful things, so I am actually capable of enjoying the awfulness surrounding the sweet story of a fat ostracized kid finding a connection with a complete shithead of a man.
The trick of the story is that the joke is absolutely never on the good (or at least “less bad”) people surrounding Thornton, but rather on Thornton himself and on other people who are awful to their fellow human beings.

The cherubic kid at the heart of the movie is a simpleminded sweetheart, but the jokes aren’t about how much he eats or how dumb he is. Instead, they’re on overly PC store managers and self-destructive thieves. It’s one of those things the media is often reporting as controversy: people unable to understand the difference between the target of a given joke and the subject. A lot of the things that Thorton says throughout this movie are awful, but the movie doesn’t support his actions.
It’s a nice offset to the traditional Christmas jollies in more ways than just its R-rated mouth.

Bad Santa ends not with a wedding, or a revelation of the reality of Santa Clause, but with a shoot out, a betrayal, and a tiny pink elephant. Thorton isn’t so much redeemed as he is rescued by one good act in the midst of a thousand awful ones. The child at the movie’s center isn’t so much saved as he is given a ridiculously hot and inappropriate nanny. But it’s still pretty damn sweet, all the same.

• “Don’t get me wrong, I was against the Clinton impeachment. What a man does with his own penis, in the oval office, in a woman’s big and tall, is his own business.”

• Even if you’re looking for pictures to put with your article on the movie Bad Santa, don’t google image search “bad santa.” There are some things you can’t unsee.