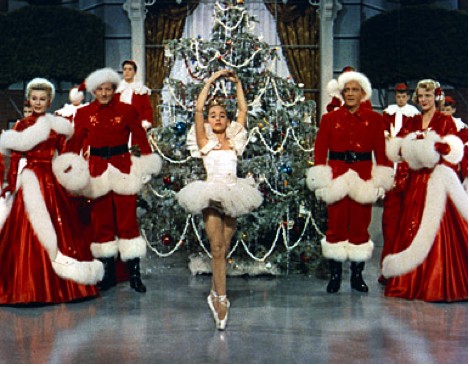 24 Days of Christmas – “I’m Dreaming Of A” Edition

The plot follows Wallace (Crosby) and Harris (Danny Kaye), a two man musical super act that starts when Harris saves Wallace during World War II. Harris is just enjoying the spoils of being a superstar, but Wallace’s bachelor-derived seriousness gets in his way, so Harris concocts plans to try and get Wallace hitched. When two sisters, Betty (Rosemary Clooney) and Judy, trick them into seeing their show, Harris sees the solution to his problem in the person of Betty.

Through a series of hijinks, Harris maneuvers himself and Wallace onto a train bound for Vermont with Judy and Betty. Judy and Betty head to the Inn where they are meant to perform, but Vermont is oddly snowless and the Inn is deserted. Just as they’re ready to leave, Harris and Wallace run into General Waverly, the owner of the Inn and their personal hero. When they find out the Inn is close to bankruptcy, they decide to perform a huge show there to try and raise its profile.

As they get ready for the show, they flirt with the sisters, hatch plans to rejuvenate the General’s moral, and generally enjoy a pre-60s bromance of the greatest variety. But after a misunderstanding, Betty becomes convinced that Harris and Wallace are just using the General for publicity and, rightfully, chews Wallace out. Meanwhile, Judy and Harris decide to fake an engagement. Pissed off, Betty takes off for New York, and Wallace has to go to beg her to come back, while simultaneously trying to convince everyone they knew to come to Vermont and save the General’s inn and pride.

Rosemary Clooney, with her broad shoulders and deep, soulful voice, is fantastic. She’s fiery and a subtle sort of sheltered awkward. And Bing Crosby, despite his painfully painted-in blue eyes, is suitably charismatic as Wallace. But I gotta say, I fell in love with Danny Kaye’s goofy Harris, who is probably the world’s most incompetent wingman, and who struts around with the manic energy of Cosmo Kramer and the ginger effervescence of a Weasley sibling.

As for the plot, it’s the kind of semi-screwball romance that the 40s and 50s excelled at. The dance numbers are more impressive than the singing (and a lot of the ballads are a little too long and serious for me), and despite the title, the movie is surprisingly light on Christmas. But damned if it’s not a beautiful moment when the General walks into a crowded ballroom on Christmas Eve to find it filled with all the men who are grateful to him for their lives.

The final dance numbers, during the General tribute show, from “I Wish I Was Back in the Army” (my personal favorite) to the opulent version of “White Christmas” are what really make the movie (or, as my Dad put it, “the made whole movie just so they could sing this song.”) And the film smartly contrasts the beginning melancholy version with the ending joyful one to bring a sense of closure and, well, Christmasy cheer.

In all, White Christmas was exactly the sort of surface-ly cheerful good time that it’s candy-colored, overly sincere box suggests. And I wouldn’t have it any other way.

• “What would be a novelty here in Vermont?” “Maybe we can dig up a Democrat?” 50s politics were funny

• Less funny? The extended number about the joys of minstrel shows (at least they weren’t in black face)

• Vera-Ellen, who plays sister Judy, is too skinny to watch, even by today’s standards

• According to this movie, men want to be in the army because they don’t have to think about their clothes and they get free food, women want to be able to pick out men based on age, weight and size. Actually, I wanted to make a feminist complaint, but that sounds about right.