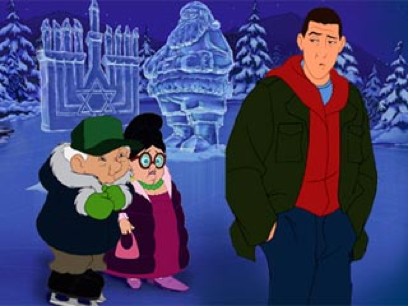 These days, it is simply accepted that Adam Sandler movies are going to be difficult to watch and yet increasingly generic. He’s made a very comfortable living by continually playing to the lowest common denominator, whether it’s through paint-by-numbers romantic or over-the-top absurdist comedies.
But there was a time, in the not-too-distant past, when it didn’t have to be that way. Adam Sandler’s early films were goofy, endearing, hilarious messes, awesome little pieces of a unique comedic voice. Around the time that 8 Crazy Nights came out, he was still in the “could go either way” sweet spot.

One of the most endearing parts about Adam Sandler has always been (at least for me) his SNL-featured Hanukkah Songs. It may seem clichéd at this point to say that it’s rough growing up envying the pop culture prominence of Christmas, but it’s nice to have something to sing while lighting the menorah besides dreidle dreidle dreidle.
Even worse is the dearth of Hanukkah movies. And so it’s obvious that when Sandler decided to make a bizarrely crass, animated Hanukkah movie he made it with a sincere intention of helping to right the injustice done to Jewish kids forced to sneak Rudolph under their disapproving parents’ noses.

And to a large extent, he does a good job of co-opting the Christmas movie traditions that are so prevalent. From the cheesy, after-school special animation to the “bad guy turns good” plotline to the over-the-top narration, 8 Crazy Nights does a good job of creating a holiday narrative that uses the themes and traditions of Hanukkah as effectively as movies like A Christmas Story play on Christmas.

Unfortunately, this is also a really gross and weird Adam Sandler movie. The same off-putting mixture of sentimentalism and gross-out humor that has characterized some of Sandler’s worst offerings plays awkwardly within this otherwise conventional holiday tale. It’s hard to enjoy the Hanukkah goodness, or even the actually moving tale when you’re also forced to endure disgusting body hair, jock-strap eating, and absurdly offensive stereotypes.

Anyway, the plot: Davey Jones (Adam Sandler) is an all around awful guy. He drinks and drives, does horrible things to the people around him, and hates other people almost as much as he hates himself. He is saved from jail time by Whitey, a four foot tall volunteer basketball ref who is as over-the-top nice as he is often disgusting. Whitey tries to rehab Davey’s broken spirit, while Davey tries to seduce a single mom who used to be his childhood sweetheart. Actually, rehabbing Davey turns out to be surprisingly easy, and basically consist of having him help Whitey and his bald, crazy sister clean cobwebs and play practical jokes on each other.

For Jewish parents looking for a happy-go-lucky movie to show their kids how cool Hanukkah can be, this movie is probably as ill-fated as the Hanukkah armadillo. Unless their idea of Rankin/Bass special is filled with poop, sex jokes, and alcoholism. But if you occupy the sweet spot of being Jewish or at least sorta Jewish, and between the ages of 9 and 16 (as I was the first time I saw 8 Crazy Nights), it’ll help tide you over until you realize that most Christmas movies are actually written by Jews, and that at the very least we’ll always have Seth Cohen.

• 99% Watch: Whitey is an impoverished nice guy, I guess, but this is about as close to the 99% watch as I’m getting with this movie. There’s no bad guy rich guys, no greed-destroying lives. I’d make a joke similar to that “Christmas presents at Hanukkah prices one,” but that’s anti-Semitic and far too easy.

• Adam Sandler once played the son of the Devil, but early-movie Davey is definitely the closest he’s been to pure evil

• People who should be offended by this movie: Short people, Asians, Reindeer, Fat people, bald people, parents, Jews, the footlocker.