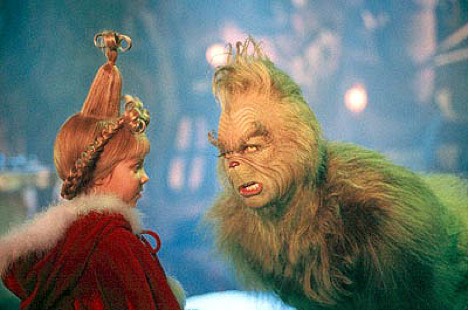 Another new Christmas movie for me! Although I’ve seen the animated version more times than you can shake a stick at*, and have read the book pretty consistently since childhood, I was full of enough Jim Carrey-fatigue by the time the live action version of Dr. Seuss’s How The Grinch Stole Christmas showed up that up until this experiment I had avoided the newest version.

Carrey’s Grinch is a grosser concoction than the animated version (and than the version I see in my head when I read the book). He’s also a lot more gleeful in his badness. Take the early scene where he struts through Whoville in a jedi-like robe and causes random acts of crazy pants. In this world, the Grinch isn’t so much an angry misanthrope hiding in the mountains disliking the Whos, but an active force of malevolence.

Along with the expansion of the Grinch’s personality, the Whos themselves have been expanded into a semi-functional and way less innocently endearing presence than in the book. They’re a Christmas-obsessed, consumerist hot mess where the overworked Post Master General finds himself at the center of a Grinch-related controversy. Who-ladies spend billions trying to outdo each other’s garish Christmas decorations. Cindy Loo Who, the very spirit of innocence in the book, becomes a overly precocious, semi-cynical, but still painfully adorable pre-teen who spends a good portion of Christmas trying to figure out what happened to the Christmas she thinks she remembers from Childhood.

In short, this is not a short and sweet tale of finding your inner child and learning to love they neighbor, but a full satire of the whole celebration of Christmas. It is simultaneously pointing out the excess often associated with Christmas (which ultimately devalues any meaning behind it) while also poking fun at people who therefore take the Grinchy “it’s all worthless” point of view. If a long version of an already perfect story had to be made, there are way worse ways to do it.

The problem of the Grinch is the same as its greatest strength. Jim Carrey, putting in a crazy, gleeful, insane tour de force performance at the center of the story, never fails to entertain. But, and this is a big but, he also makes every other scene pale in comparison, and reveals just how little there really is to that particularly side of the satirical edge. Cindy Loo Who may look super cute, but it’s hard to really care about the candy coated, overly ironic, way-too-clever for its own good Whoville part.

I also wasn’t a huge fan of the whole “spelling out the reason for The Grinch’s grinchiness.” It definitely fleshes out the character, but sometimes, it’s better just to keep someone a force of chaos.

Cindy Loo Who, in this version, attempts to convince The Grinch to come be master of Who-bilation for the Christmas ceremonies in Whoville. After he wrestles with his self-loathing, he decides to come on down to the people that scorned him once upon a time. Although he comes to bask in the gathered Whos’ fear and awards, he ends up in an uncomfortable family reunion that sees him stripped of his dignity in a series of painfully over-the-top Who celebrations, most of which seem to involve stuffing disgusting quantities of food into Jim Carrey’s face.

Apparently, Jim Carrey found the process of becoming The Grinch so harrowing they had to consult a Navy Seal expert in torture resistance. Watching these scenes, one can really see why.

Nonetheless, everything seems to be going well, complete with a slow-mo race-winning sequence and joyful parade through town. Cindy is certainly happy. Until the mean, self-obsessed mayor decides to give him a gift that ties in directly with his childhood trauma, before stealing The Grinch’s former gal pal.

The Grinch predictably explodes, monologuing about the evils of consumerism, shaving the mayor’s head, and depressing little Cindy (he also lights a tree on fire and follows it up with one of the world’s worst puns).

When this fails to ruin the Whos’ Christmas, The Grinch decides to follow the original’s plot and steal all the presents. This whole part is unnecessary and kind of boring. It gives us nothing new about the character, the situation or the movie in general, besides setting up a higher level of stress on the Lou Who family.

After this middling middle, the movie starts to pick up steam again, mainly because Carrey is alone acting crazy, and because the idea of this psycho rummaging through people’s homes to steal their Christmas is pretty funny. (Less funny is the scene where he makes the sleeping mayor kiss his dog’s butt, but that’s a whole other issue).

Then, the Whos wake up and are predictably nonplussed, until the whole Who family reminds them that all those presents and consumerism was keeping them from the true meaning of Christmas anyway and they decide to sing. The problem is, this is totally unearned. Cindy Lou Who and family may have been feeling this since the beginning, but the petty creatures that populate the movie’s Whoville certainly haven’t. So while it’s very nice that adorable Cindy can redeem The Grinch, it seems unbelievable (yes, even in a movie that features a fully green yeti creature and an entire world inside of a snowflake, one can find stuff that is too unbelievable) that she has also redeemed the town full of mean mini-grinches.

I wanted to feel heart warmed by the end, I did. But aside from thinking that Jim Carrey should become a yoga guru for how many insane positions he can get his body into, I mostly just felt nostalgic and curious as to how I can get the animated version.

• 99% watch: the Whos celebrate when they max out a credit card, and cheerfully say “I’ll be paying this off for years! Plus my interest rates are awful.” Also, the mayor buys his lady love a car “generously funded by the taxes of the people of Whoville.”

• “One man’s toxic sludge is another man’s POTPOURRI. I don’t know it’s some kind of soup”.

• HOLY CRAP. That’s Jenny Humphrey. JENNY HUMPHREY IS CINDY LOU WHO. How did this realization not come sooner? Oh, Jenny, you are going through hit SUCH a downward spiral.

• While I mostly loved Carrey’s take on The Grinch, I found myself struggling to contain my nausea whenever he sexually harassed Ms. Whovier.

• Do you think Carrey intentionally based his Grinch voice on Jimmy Stewart?

• The Grinch agrees with me about Santa. “He probably lives up there to avoid the taxes.”

• Additional 99% watch: “Arent you gonna cuff me? Put me in the chokehold? Blind me with Pepper Spray?”

*If that’s your idea of a good time.