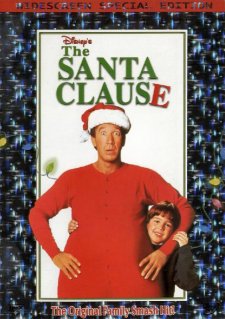 Half the battle with watching The Santa Clause is just ignoring the late 90s parade of former stars (Judge Reinhold!) and future stars (David Krumholtz) and stars that inexplicably have stuck around long after their usefulness (Tim Allen, although he actually gets a lifetime pass for Toy Story) that litter the pathways. Add to that the very 90s humor (whereby Tim Allen grunt-and-weird-noises his way through awkward social interactions) and the SUPER 90s plotline (overworking parent has to learn how to love his son the way he deserves to be loved in the middle of a divorce*), and The Santa Clause immediately feels about forty years old where it’s really less than 20.

But God am I a sucker for “Yes, Virginia, there is a Santa Claus”-style movies, even while they sort of boggle the logical part of my brain. How do parents not realize that some of the presents under their tree didn’t come from them? Are they just that stupid that they assume they bought the extra presents? I have no problems believing that Santa’s magical suit gives Tim Allen magic powers and unusual weight gain, but I can never seem to completely jump this logical hurdle (and couldn’t when I first saw this movie at age 7). I have a similar problem with Elf and Miracle on 34th Street, although the first of those is so damn charming that I can’t even think about my issues with logical consistency.

Anyway, the plot. Divorced Dad Tim Allen has his son, Charlie, for Christmas Eve. Divorced Dad doesn’t have a good relationship with Charlie (or anyone for that matter), so he’s desperate to convince Charlie of the truth of Christmas. After Charlie hears a “clatter” on the roof on Christmas Eve night, Divorced Dad heads on out to check out the noise, accidentally knocking Santa off the roof, and causing him to have to engage in a series of hijinks in order to put on the Santa suit and deliver toys. This relies on one of my all time favorite devices: the adorable kid who insists upon his father doing really, really stupid things until his dad has no choice but to say yes. It allows the film to quickly leap past the narrative jump from realistic divorce dramedy to a film where Tim Allen gets in verbal altercations with Comet the reindeer. After a night of delivering presents, Tim Allen inexplicably thinks he gets to go back to his normal life. But fate and David Krumholtz have other plans.

A hard and fast rule: if a character is played by a former 80s star or by a woman with a name pronounced wrong (in this case, Laura is pronounced as Lara), then that character is a douchebag who will stand in the way of our protagonist’s wishes. So the middle part of the movie features Allen’s inopportune descent in Santaism while his ex-wife and her current psychiatrist husband take his son away*, until finally Allen and the elves kidnap Charlie and head to the north pole to prepare for his second year of Santa Claus’ing duty.

Once Allen’s Claus gets locked up by the police, to crying children’s dismay, and Charlie and the elves are left to rescue them, the movie molds into a “everyone needs to believe” fest, which, again, I kind of love. The Santa Clause may not be my favorite in the genre, but around the time the adorably precocious elves started gift wrapping policemen, I’ll admit I was ready to give myself over to this very dumb movie.

At the end of the day, The Santa Clause is a supremely silly movie hampered with a really not silly plot. For me, the whole divorce and abandonment thing was never really able to be overcome. As an adult, it doesn’t really work for me, and if I’m remembering correctly, six year old Rachael didn’t buy it too much either. It’s entertaining, but the emotional underpinnings of the story never really clicked for me. But I do wonder how it would feel to someone (kid, parent, or other) dealing with divorce and family issues, to see such a gosh darn optimistic movie about the whole situation.

• “You’re fatter this year,” is never an okay thing to say to someone, even if they are Santa

• “Most grownups can’t believe in magic; it just, sort of grows out of them.” Most holiday movies have this belief, but I like how unironically this film gives itself over to it.

*This is one of many 90s era divorce movies where a dad is on the crappy side of a custody battle, and where he goes to fairly illegal lengths to try to get his children back. It’s a fascinating little slice of national consciousness.