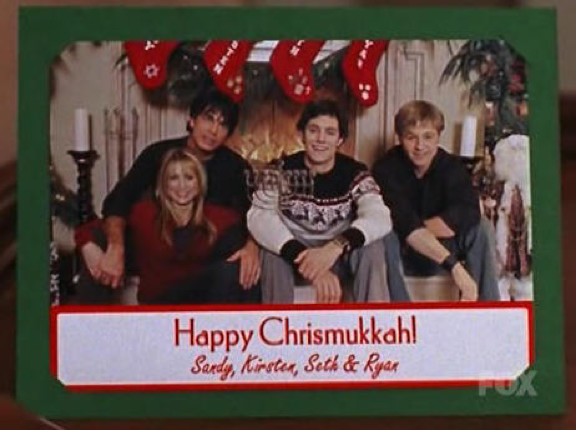 NOTE: It’s hard being Jewish at Christmas time, but nothing is quite as difficult as dealing with the complete dearth of Hannukah movies. In trying to put the “mukkah” into the 24 days of Christmas, I decided I needed at least two Hannukah offerings. Unfortunately, 8 Crazy Nights is the only one that even exists, as far as I can tell. So I had to substitute my favorite Christmukkah classic, instead.

Until 2003, there was never really a family on TV that seemed like mine. But in 2003, onto the scene came a young, comic-book-obsessed, fast talking half-jew and his loving, tradition-obsessed family. And although they were far more dramatic than mine could ever be, The Cohens (and specifically son Seth) seemed more like reality than I had ever seen before.
This was true before the seminal episode “The Best Chrismukkah Ever,” but it was surreally true after. Despite my adoration of Christmas, I always felt sad that the full extent of the family traditions I experienced every year were not reflected in the Yule tide joy I saw on screen. But Seth’s singleminded obsessiveness in the face of Chrismukkah (his combined Hannukah and Christmas celebration) was exactly what I experienced every December.

For a while in the mid 2000s, The OC was a large part of the pop culture zeitgeist. “The Best Chrismukkah Ever” is a perfect demonstration of why. It has it all. Dorky references and indie bands (which would, after this show, become the norm for cool TV shows)? Check. Romantic drama? Check. Seth fast talking? Check. Peter Gallagher’s eyebrows? Check.
But what really made The OC more than just a latter day 90210 ripoff with a better soundtrack was Seth Cohen. In the dark days before Chuck and The Big Bang Theory, geeks on TV were mostly relegated to quirky side kick and punching bag. Even when Dawson Leery was supposed to be all-sensitive indie boy, he was never really a dork. But Seth? Despite looking like Adam Brody, he was an outcast, comic-obsessed nerd boy without a friend to call his own before the arrival of Ryan Atwood. While a lot of his most endearing qualities would become characicatures by the end, “The Best Chrismukkah Ever” has them all at their endearing best. He’s awkward, believably so, and his reaction to Summer’s “gift” is the most believable thing about it. And he’s so intensely into Chrismukkah that you want to share his joy AND his holiday (so much so that a lot of my non-half jew friends wanted to join in on the goodness I had been getting since year one).

“The Best Chrismukkah Ever” was also a huge turning point for the show, acknowledging Marissa’s problems, hurdling the Seth-Summer-Anna triangle towards its early resolution, and bringing the Sandy-Kirsten-Caleb drama to a rolling boil.
And though the episode ends with Seth getting turned down by both Summer and Anna, and Ryan frustrated with Marissa, it also ends with Ryan finally giving himself over to the Cohen way of life and putting his stocking up over the fireplace. At the end of the day, despite all the booze and the romance, that decision to include Ryan in this idealized family was the beating heart that makes The OC work. And it is the reason why this little half Jew Christmas obsessive has made “The Best Chrismukkah Ever” an essential part of her holiday routine.