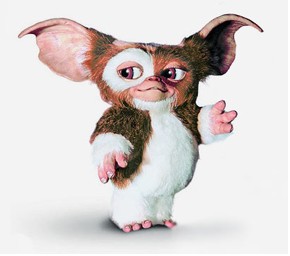 Stephen Spielberg! Christmas! Furry creatures that turn into murdering beasts! It’s a Rachael Christmassmorgasborg!
Oh lord in Heaven, had I forgotten how much I love Gremlins.

This 24 Days of movies project has been immensely rewarding, but nothing quite prepared me for the rewards of rewatching Gremlins as an adult.
From the cheesy pseudo-noir opening on, I was in love. The casual and Disney-like racial stereotypes. The awesome Indiana Jones-esque scenery. And oh God in Heaven, GIZMO. Forget what I said on my reviews of It’s A Wonderful Life and Miracle on 34th Street — there is nothing in this world more indicative of the spirit of Christmas than a well-meaning Dad accidentally buying his kid a homicidal pet.

The plot, as experienced solely as a metaphor for 80s-level excess: Broke, inventor Dad (the spirit of American ingenuity) buys bank-teller son (a boy selling out his dreams for a buck) a strange pet in China Town (OUTSOURCING!) for Christmas. Said pet is Gizmo, who is adorable and a puppet and looks like Yoda except for more travel-sized and furry (the benefits of globalization). But there are three rules going along with Gizmo:
1. No bright lights (a brilliant metaphor for the way that over-exposure and commercialization cheapens our Christmas experience)
2. No water (a trenchant reminder that although we may have plenty this Christmas, there are people all over the globe suffering without basic resources)
3. No Food After Midnight (a not-so-subtle nod to the growing American trend of obesity and gluttony, and the way it can devalue a human being’s sense of themselves).

When we shine a light on something as pure as Gizmo, it dies. When we give it water, it duplicates, and each duplicate is worse than the first. When we feed its gluttony, it becomes evil. The movie, therefore, is actually a comment on the way that our normal experience of Christmas turns the adorable (Gizmo) into the profane (evil Gremlin monsters), and how then we have to microwave our excess to death (obviously a metaphor for overt government intervention. Or maybe for how women are ultimately the solution to our economic problems. THAT’S IT! This movie is SUPER feminist.)

Check out the scene, before the duplicates even turn overtly evil, when baby Gizmo just wants to play his awesome mini-saxophone music (ARTISTIC FREEDOM!). The mean new Gremlins, who just want to play overly commercialized video games, spit acid onto Gizmo (uh… the acid of capitalistic greed?). At another point, a scientist takes a mogwai (the pre-Gremlin Gremlins) and runs tests on him. ANIMAL TESTING, duh. The first person the Gremlins kill? A black man. Which is clearly all about… uh… racial injustice. And the school swimming pool that serves as home to the over-population of Gremlins is clearly a metaphor for… The Achievement Gap?
Okay, so maybe not.

Maybe the movie is just an awesome one that uses the backdrop of what Christmas movies love to talk about (compassion, family, and believing in yourself) to add color to a story that features tiny little creatures terrorizing a town, including the best use of a swimming pool and one of those stair devices ever. I love it either way.

Random Observations:
• Two Judge Reinhold movies in one Christmas season! I must have been good this year!

• 99% watch: Once again, the evil person in this Christmas movie is a heartless money lender/ bank manager (SHE TRIES TO KILL HIS DOG?!!)

• As a kid, I had a battery-operated Gizmo (Who never actually worked, if I remember correctly), so there’s something immensely comforting about the first moment when Billy pulls him out of the box

• This movie is a referencing machine, from It’s A Wonderful Life to Invasion of the Body Snatchers.

• Again, I’ve got to give it up for my much-maligned Chris Columbus, who wrote Gremlins.

• Gremlins may kill people, but at least they sing them Christmas carols first!

• Any true Christmas movie should include at least one scene where alien-looking beasts try to destroy a screaming Santa Clause. Duh.

• Come on Corey Feldman, you fight vampires. Get those GREMLINS!

• That dead Santa/father on Christmas story is dark. So dark it almost makes me feel bad for all the snarkiness.

• “You do with mogwai what your society has done with all of nature’s gifts. You are not ready.” HA! The movie agrees with me about the metaphors. Kind of.