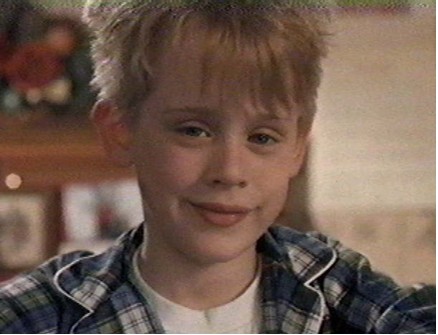 In honor of Home Alone, a movie I must have watched fifty four thousand times from age 3 to age 13, and not a single time since, I’m going to do this whole review in the form of random observations, and let my rampant, 24-year-old ID take the reins:

• The McCallisters are going to Paris? What kind of fancy ass family are they?

• For all the hate I would like to pile on Christopher Columbus as an incompetent director, he’s pretty great here, effortlessly capturing the hustle and bustle of the McCallister household pre-Christmas.

• “Mom, does Santa Clause have to go through customs?” actually, little girl with strange glasses, that’s a great question. Does that communist bastard get to carry his goods across borders without taxes?!

• I’m not a parent, and I was an awful teacher, but I’m pretty sure it is not appropriate to call an eight year old a “jerk.”

• Also not appropriate? Calling your mother “dummy,” even if she is probably the world’s worst mother.

• My last movie may have been Bad Santa, but I think this family is crueler to Kevin than anyone in that movie was to anyone else, including when they tried to shoot each other.

• “There’s no way we’re going to make this plane. It’s leaving in 45 minutes.” Just be grateful this is pre-9/11. OH the 90s, a heady time when you got to just sprint, fully shoed through airports without having to worry about being tackled by airport security.

• A side story could be told about the neighbor child who apparently went on vacation with the McCallisters.

• This movie, if it were written today, would take five minutes: Kevin gets left behind, Mom calls him from Paris on his cell phone, he takes a cab to a senile uncle’s house and spends the holiday weekend playing Angry Birds. Wam Bam done.

• How many kids do you think had a really hard time staying home alone for the first time because of this movie?

• “This is ridiculous. Only a wimp would be hiding under the bed. And I can’t be a wimp. I’m the man of the house.”

• The scene of Culkin narrating his beauty routine reminded me creepily of the similar (although far more adult) scene in American Psycho. Is it possible that all this familial abandonment leads to Kevin becoming the next Patrick Bateman?

• Another thing that wouldn’t fly today? Shoplifting. That shit will get you pepper sprayed faster than sitting down at a UC Davis Occupy event.

• Kevin could be the smartest kid ever. I want to have a mannequin party with a ridiculously youthful Michael Jordan cut out.

• I’ve got to say, I feel Kevin’s pain on the cheese pizza thing

• Ooooh, the robbery has begun. This is, weirdly enough, the only part of this movie I really remember.

• “I know you’re not the real Santa Clause. I’m old enough to know how it works. But I also know that you work for him.”

• A good lesson for kids: even people who seem creepy can be good people with their own tragic history. A bad lesson for kids: please befriend the strange man with the overgrown beard who walks around with a shovel.

• I feel like Kevin’s ridiculous mastery of physics, chemistry, and invention is a testament to his elementary school science teachers. Oh the joys of the suburbs.

• Least credible part of the movie, according to my mother: the fact that Kevin cleans up all the mess he made. I think that is more of a statement on myself and my brother than I am comfortable with.

• Fine, I’ll admit it, I got teary eyed watching the end of movie reconciliation scenes. So sue me, it’s Christmas!

• I wasn’t planning on watching Home Alone 2 as a part of this experiment, but I might have to now. Damn it.

Home Alone definitely belongs in that category of films that felt light and endearing as a kid but absolutely horrifying as an adult. Still, it remains endearing, witty, and fun, even when you see yourself reflected more in the hapless parents than in the eight year old Kevin.