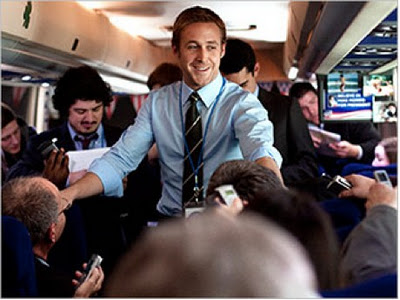 The Ides of March

I walked into The Ides of March terrified I’d be bored by a political thriller lacking heart. Instead, I found myself nearly bowled over by a moral thriller playing with the language and heartbreak of politics.

The movie is essentially a moral tragedy. It tells the tale of idealistic campaign manager Steven (Ryan Gosling), who is working on the presidential campaign for the upstart democrat, Governor Morris (George Clooney).

Seeing the trailer or the intriguing poster for Ides of March, the parallels with Obama’s rise to power and subsequent presidency are pretty potent. Here we’ve got an idealistic politician, running on a platform of Hope. In fact, George Clooney’s governor Morris is probably even more “Hope and Change”-y than the real thing. For the first half hour or so of Ides of March, the film does a fabulous job of creating a politician who you really wish could win a national election. He runs a left-leaning ticket: pro-gay-marriage (“that’s a silly question”), anti-death penalty, pro-choice, anti-war and dependence on oil. But what he really embodies is not so much Hollywood’s liberal bias as our near universal desire to believe that our politicians believe what they say and say what they believe. He’s a straight shooter to the extent it pisses off his campaign directors. He’s a decorated vet. He has an awesome marriage with Elizabeth Bennet, for Christ’s sake! He’s even more “real” than Obama felt in the lead up to the 2008 election.

And he represents everything that Steven wants to believe about our political system, much like many Americans wanted to believe Obama did in 2008.

But the movie stops being an Obama parallel pretty quickly around the halfway point (or at least I hope so). Here, the focus is less on Steven’s political character than it is on his moral character. I imagined, upon seeing the trailers, that this would come down to him getting involved in shady dealings for the sake of victory. I pictured a hammer-fisted tale of how power corrupts. But the actual storyline was fascinatingly subtle, a case not of clear right vs. easy, but rather of the awful confines that trap our protagonist in and force his hand, and by extension, often calcify the political process.

Steven is a smart young man, so smart in fact that men who have been working in this game for far longer than he has find him a threat. He has the easy charisma to do everything from romancing an intern to convincing a nation, and also has the youth and ambition to make it happen. But he’s not a slick conman either. As portrayed by Gosling, Steven is a carefully guarded bundle of sincerity, who refuses to admit the intense naiveté that pushes all his actions and leads him down the path to his inevitable tragedy. Steven doesn’t just bang a random intern; despite his attempts at playing the part of the heartless cad, Steven betrays a genuine fondness and warmth for his supposed conquest. Similarly, he doesn’t just work for Morris cause he thinks he can win and he wants a White House job. He believes, desperately, painfully, in a man who is “the real deal.” He’s not doe-eyed; he doesn’t believe in the “GOSH gee” patriotic blindness of Capra movies like Mr. Smith Goes to Washington. But when he writes words like “my religion is the constitution,” he is revealing a deep-seated belief in the inherent honor in politics, even when it requires a healthy helping of talented people manipulating the populace to make it palatable.

Steven knows better than to run his mouth of to Marisa Tomei’s floppy-haired journalist, Ida, but when he tells her late in the game that he “thought they were friends,” it’s only half the action of a desperate man attempting to save his own ass. The genius of the way that the film and Gosling craft this character is that you also know he truly thought they were friends, that somehow all his would-be-cynical ideas of the world were just window dressing disguising an inherently good and noble heart. Despite his veneer of cynicism and competence, he is a true believer realizing just how crappy the world can be.

I’m not going to spoil any of the plot this movie has coming, because half the beauty of it is how unexpectedly it eventually unfolds. I will say that the movie’s most amazing trick is to completely transform our perception of Morris without ever needing to be explicit about it. Morris never has a villain moment. At the end of the film, you have every right to hope he’d be just as good of a president as he would have been at the beginning of the film. And yet everything about him is different, and everything about Steven (and the viewers, by proxy) is different in relation to that change.
It’s rare that movies hit me quite as completely by surprise as Ides of March did. It is one of the most profoundly human tragedies put out in recent cinema, and a beautiful and careful crafting of complicated characters that are undone as much by sincerity as by hubris.