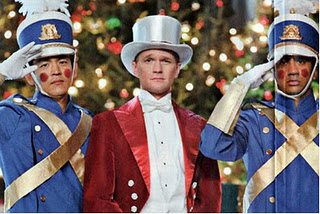 As we come upon awards season, we’re starting to see the rollout of prestige films- delicate beasts that tackle serious issues in intriguing ways. We get to see biopics, war dramas, and for some reason a movie from the world’s most famous director about a horse. All signs point to Oscar times ahead at the multiplex.

And then there’s It’s A Very Harold and Kumar Christmas. Which is, honestly, fantastic.

Not to get too pretentious about a movie that has more boobs in it than most porn movies, but IAVHAKC (that’s a lovely acronym) manages to deftly meld the surreal conventions of a Christmas movie with the traditional stoner absurd aesthetic they perfected over the past two years. On the top of that, it’s a pretty convincing “man boy becomes just a man” story, as well as a beautifully characterized “comedy of reunion” bromance. In short, it’s what you get when you take really talented people and ask them to make a movie that includes Santa bringing Harold a giant joint that accidentally burns down the Christmas tree that Machete brought for the half Mexican/half Korean Christmas extravaganza.

As with the first two, IAVHAKC probably wont appeal to anyone who is opposed to stupid jokes or nudity on principal, but it’s still a lot smarter than a lot of people laughing at these jokes will realize. The thing that sinks about a lot of supposedly dumb comedies is the perception (or possible necessity) that you have to be stupid to enjoy it. Similarly, pot comedies suck when you have to be high to enjoy them. What makes Harold and Kumar continue to seem fresh years after they first tried to finish a sojourn to White Castle is their ability to make dumb comedy that is based in observations of how manically messed up the world around them can be, while simultaneously also maintaining a joyous glee in seeing how far they can take their idiosyncratic jokes.

The extended Neil Patrick Harris cameo should feel old by now. But as with the “stoners like to eat” jokes, the “people of different races interacting” sketches, and the continual escalation of “oh shit” that dogs our characters throughout all three movies, the NPH bits continue to be fresh enough and observant enough that you aren’t dogged by annoyance as you laugh. In fact, NPH’s performance in this one might just be his best yet, as a coked up man-whore version of himself who uses his homosexuality to lure backup dancers to his dressing room for naked massages.

It shouldn’t be true, but I think this might just be one of the best Christmas movies I’ve ever seen*.

*This marks the unofficial first entry in “2011’s Year of Christmas” movies, a continuation of my feature from last year. As the holiday season slowly encroaches on us, I will be sharing with the whole My Cinema family my almost demented joy in movies and TV with holiday based plots.