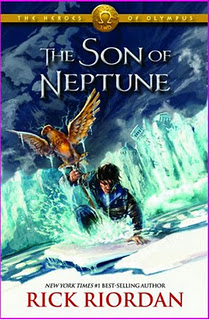 Heroes of Olympus: The Son of Neptune

I am too old for Percy Jackson. I’m okay with that. But I think it’s important to start off this review with a qualification: Percy Jackson is not Harry Potter, it’s not the The Hunger Games, it’s not even Twilight. Which is to say, it’s not a careful examination of adult themes through the guise of children’s literature.

What Percy Jackson is, to use a slightly awkward sentence construction, is a truly awesome adventure story whose self-contained mythology draws heavily on Greek and Roman myths while providing often funny modern touches. On top of that, author Rick Riordan has created believable teenage characters who just happen to have the powers of greek or roman gods.

Starting with the first Percy Jackson, and culminating with FIVE books in that series, Riordan told a deep, enriching story that took Percy from awkwardly unaware demigod to Hero of Olympus. When I heard that Riordan was going to take the same mythology and tell new stories using new characters, I was skeptical. Why go back to the well after telling such an intriguing (if somewhat repetitive) five book saga? Then I read The Lost Hero, in which an amnesiac hero named Jason showed up at Camp Halfblood and quickly ended up on a quest with two friends to figure out his past and Olympus’s future. Despite having almost exactly the same plot structure as all of Percy Jackson’s books, Riordan was obviously excited by his new characters, and his gift for light dialogue and fun characters remained intact.

At the end of that story, we find out where the missing Percy Jackson is. The newest book, The Son of Neptune, follows an also memory-addled Percy as he makes his way through the Roman Gods. What holds these two books together, and connects them with the next book to come out in this series, is a growing, dark storyline involving the awakening of Gaea and war.

Again, the plot isn’t shocking stuff. Riordan isn’t someone who delves into overarching metaphor and deep takes on humanity. Instead, he’s an expert at mini-metaphors (like casino’s sucking the life out of people) and amusing turns of phrase (like Amazon being run by ACTUAL amazons). He’s also ridiculously good at creating stories that fit together effortlessly, and unfold at a brisk pace while actually saving a ton of plot for later. At the end of Son of Neptune, I was excited for the next book, and also exhilarated by the tale I just read.

As I said, Percy Jackson isn’t a book for adults (although it can certainly be enjoyed by them if they’re able to overlook a certain level of adult bias). But it is a truly great children’s book that never condescends and always entertains.