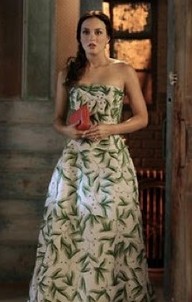 Where the Hell is Blair Waldorf?

I have stuck with Gossip Girl long past what most people seemed to consider its expiration date. I do this in large part because it’s addictive and filled with really pretty people. I’ll probably continue “XOXO”ing until the day the dialogue loses its juicy flavor and the drama stops being oddly intriguing.

But the real reason I’ve stuck with Gossip Girl through five seasons, countless boring Serena and Jenny Humphrey storylines, Empire shenanigans, and Ivy/Charlie ridiculousness is because of one character and one character alone: Blair Waldorf.
Which is, of course, why my Gossip Girl fanclub card might be about to be revoked. There are a lot of things to like about the fifth season of the CW show. I like Elizabeth Hurley, Dan is finally getting some decent storylines (Even if his hair is becoming offensively bad. Seriously, the Humphrey wardrobe is a much better parody of hipster culture than 2 Broke Girls can every hope to put together), and I’m enjoying watching Chuck try to figure out who he is without Blair. But, speaking of which, where the hell is Blair Waldorf?

Oh, you say, there she is! Perched beatifically on the arm of the forever drab-despite-his-sexy-accent Louis, subtly patting her growing baby bump? If that’s supposed to be the woman who charmed her way into first NYU and then Columbia, who gave up true love to follow her passions, and whose teenage wrath once had grown women shaking in their Jimmy Choos, then I’m not sure the show has ever actually met Seasons 1-3 Blair Waldorf.

I have nothing against Blair deciding to become a better person. In fact, I found the reasons behind her and Chuck’s final dissolution last season oddly compelling. Although they loved each other, they were keeping each other from being better people, and therefore from ever truly being happy. Okay, I’ll buy it, in a silly TV drama kind of way. But since when does being a better person have to mean being unfathomably weak? Growing up doesn’t have to mean NEVER getting your own way.

In the most recent episode, a great big power showdown occurred between the Princess of Monaco and potential future mother-in-law to Blair, Princess Sophie, and Prince Louis. Ostensibly, Sophie was worried that the strong-willed women carrying the future heir to the Grimaldi crown would be incapable of putting crown before heart. But that’s all Blair has done all season. She’s completely sublimated herself in her pursuit of princesshood. Maybe it’d be more believable if there was any real chemistry between her and Louis. As it stands, the Waldorf who broke up with Chuck when she thought being with him would get in the way of her highly professional and awesome and powerful dreams can’t be seen inside the well-dressed arm candy parading around talking about her past mistakes.

For the record, I don’t mind that Gossip Girl doesn’t exist even adjacent to the real world; that Dan Humphrey never seems to go to class; that Serena stumbles into a high powered Hollywood job; that Chuck Bass has never ended up on a sex offender registry. And I have no problem with the idea of Blair wanting to be a princess. But Blair would want it for the power, the prestige, and the ability to enact her vision of the world upon a whole unsuspecting country. Blair was a smart enough girl to realize that motherhood and a crown would not be enough for her if it meant giving up her autonomy. AND BLAIR SURE AS HELL DOES NOT NEED SPINELESS LOUIS THE BORINGTEENTH TO STAND UP FOR HER EVERY DAMN EPISODE.

So here’s the deal, Gossip Girl. I’ll give you a little while. I know the people around Blair are starting to realize how stupid this all is. But I have very little patience, and Revenge is already satisfying my need to watch rich people getting their comeuppance.