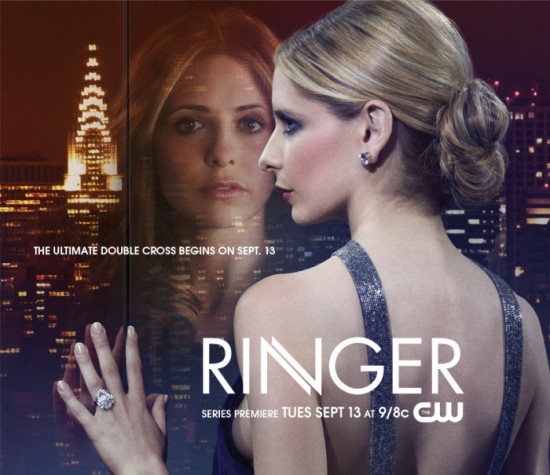 Apologies for the delay on this one. As major Buffy fans, we at My TV have been somewhat timid when it comes to jumping into Ringer. Turns out, trepidation was the right instinct.

The CW mystery has perhaps the worst production values I’ve ever seen in primetime. The overuse of cheap green screen in the pilot alone is shameful and sets the audience up to not take the series seriously as it moves forward.

The storytelling isn’t horrible, though it’s not exactly Emmy-fare. The over-dramatic story of twins Bridget and Siobhan has that sort of pretty-but-morally-questionable-people-in-lots-of-trouble flare that could prove to be a lot of fun. It also has that damaged-head-cases-try-to-make-good spin that is almost always tedious.

The cast, with the exception of decent performances from Tara Summers, Nester Carbonell and my beloved Kristoffer Polaha (who’s had at least a recurring role in no fewer than 4 canceled series that I loved), is pretty dismal. Zooey Deutch is horrendous as Siobhan’s sketchy/spoiled stepdaughter and the truth about Sarah Michelle Geller is a little tough to face.

See, the hype around Ringer has been 100% Geller-centric, she even had her own EW cover story- the show has been touted as “the return of Buffy“. But it’s not the return of Buffy, far from it. What we as a collective culture seem to have deluded ourselves into thinking in anticipation of Ringer is that Buffy made Buffy, which she really didn’t. Joss made Buffy. Actually, that’s not even true, otherwise Dollhouse would have been a lot better. You know who made Buffy? Joss+Willow+Xander+Giles+one of the greatest writing staffs in history+a miriad of other brilliant characters+, yes, Buffy (aka Sarah Michelle Geller). The mediocre actress far from did it alone, in fact she was probably the weakest link in the stellar core cast. She got better as the years went on, settled into the role a bit, and it’s worth hoping she’ll do the same if Ringer is given the chance to exist. But to rely on Geller alone to make an unimpressive show great- that’s asking a lot more than she’s capable of giving.

Ringer is probably the weakest offering I’ve encountered so far this pilot season, so it’d be nice if people would stop calling it “the return of Buffy“, because it just isn’t.