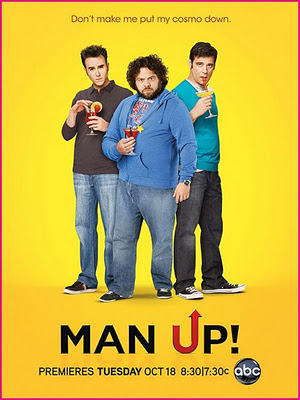 Every once in awhile I’ll be watching TV late at night, computer shutdown for the day, when something makes me react so strongly that I come downstairs, restart my laptop and set about writing a very early morning review. The pilot episode of ABC’s new Tuesday night comedy Man Up! was such a show, and not in a good way.

Man Up! is somehow both derivative and shocking. Retreading the boring comedy ground of marriage, bromance and the plight of the modern man-child, the new show is essentially last season’s very hated and early canceled Traffic Light, except I actually thought Traffic Light was underrated- its relationships were believable, its actors were engaging and it explored the stages of courtship in entertaining and new ways (“new” being a relative term). Man Up!, meanwhile, presents 3 childlike grown men, none of whom are remotely charming or likable in any way, a three-sided friendship that seems to have no roots, a boring portrait of marriage and fatherhood, an even less interesting take on bitter divorce and a condescending view on sentimentality in singledom and a point of view that seems unclear whether the men’s gaming habits are fun or deplorable. It’s also got Teri Polo, who I’ve never really warmed to, and a weird second rate Isaiah Mustafa substitute doing a sort of long form Old Spice shtick.

But it’s one thing to be predictable, boring and uninspired. It’s another thing altogether to get the majority of your comedy from men insulting each other with feminine comparisons. Ooh you did a kind and generous thing, you showed an artistic impulse, you just shared a feeling- you must have a vagina! HAHAHAHA! Add to that the fact that the show outright stated that spending an afternoon trying to think of a special birthday present for your son is somehow beneath a “real man” and you’ve got a show that’s really pissed me off.*

It’s really pretty hard to offend me on a feminist level- for a woman I’m fairly apathetic to the cause, oftentimes I’m actually standing up for the men. But this is just over the line. But it’s not just insults to women, Man Up! makes a point of diminishing every single admirable thing in its characters, mocking it until it’s gone and the character is officially a “man”. From 13-year-old Nathan’s enthusiasm to singleton Craig’s dopey sentimentality to Will’s rare thoughtfulness and penchant for good-smelling shower products, Man Up! seeks to take it all away and replace it with, well, if I understand correctly, their ideal is some sort of Vietnam vet who gets in fights in front of their kids and spends the night in prison for battery.

It’s not only not funny, it’s pretty deplorable actually. To all the young boys out there: PLEASE tune this show out before it turns you into exactly what you shouldn’t be trying to be- violent, competitive, insensitive and, for lack of a better word, primitive.

*And just for the record, my father spends months thinking up the perfect gifts for birthdays and Christmases but he could also benchpress series creator Christopher Moynihan in his sleep. I don’t know how these people are defining manliness but I’ve got a 6’1, 200 lbs marathon runner they need to meet.