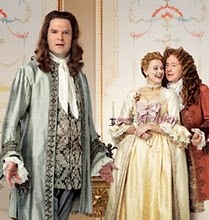 In Stratford: The Misanthrope

Ranking: #10
Set designer John Lee Beatty hits The Misanthrope out of the park. As does costume designer Robin Fraser Paye. But there’s a reason the aesthetics and design teams are the standouts in this production- it’s a superficial one.

Moliere’s brilliant script is in predictably fine form with the superb English translation by Richard Wilbur- who had the insight to translate in verse, maintaining Moliere’s hard-to-deliver but wonderfully entrancing rhythms and rhymes. Director David Grindley does an uninspired but acceptable job of staging the amusing story but neglects to give it any real heart.

Ben Carlson, always at his best when playing sardonic comedy, delivers his most charming leading man performance since 2009’s The Importance of Being Earnest and the suave Juan Chioran is his convincingly conformist friend. Sara Topham is at her usual mind numbing worst, prancing about in her frouffy gown as if it can substitute for character development and her various suitors are played by an assortment of wasted festival talents turned fops for this piece.

What could be an interesting AND amusing satire of societal convention becomes a frivolous show of pretty, mindless exercises. It’s not unamusing but it really is a waste for an actor of Ben Carlson’s caliber to be slumming it delivering Moliere with the emotional punch of a Hallmark card.

The Misanthrope plays at the Festival Theatre in Stratford, ON until October 29th.