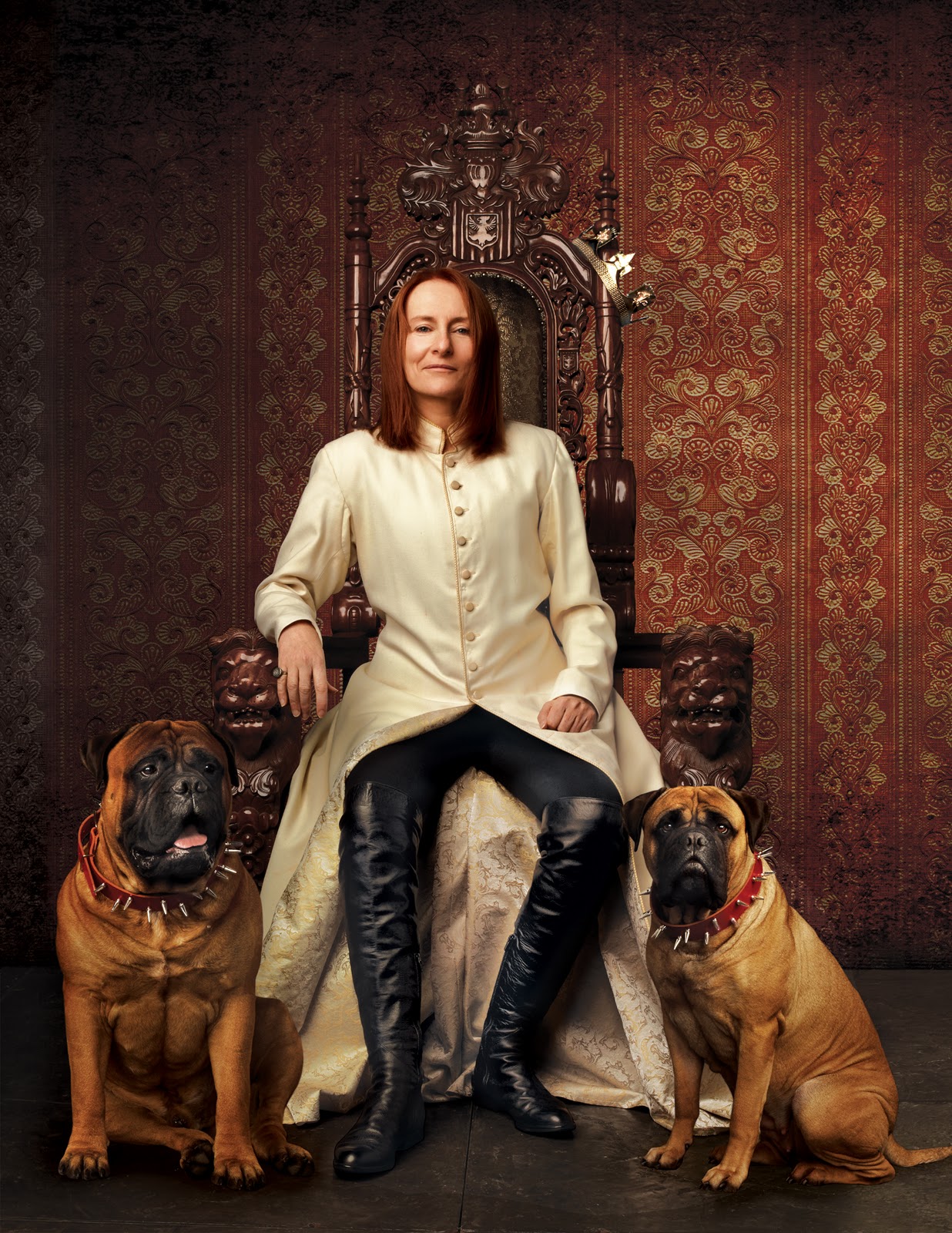 Take a look at that promotional photo- doesn’t that look like a kickass Richard III? Unfussily sexually ambiguous, surrounded by attack dogs and draped cockily on a throne that’s not hers- I really think that should have been Seana McKenna’s Richard III. I mean look at those boots! Who needs a penis when you’ve got bitch stompin’ boots like those? Alas, there seemed to be a bit of cowardice running around in Richard rehearsals at the Stratford Festival this year as their brave move towards busting open the great roles for whomever was most qualified dwindled into a single mediocre production without the heft to knock politely, not to mention break down any doors.

I don’t think of the mighty Seana McKenna as a particularly feminine woman. I don’t think she’s butch by any means but it’s also not necessary to turn her into a troll to make audiences believe her in a masculine role. She’s largely considered the greatest classical actress in North America- she could have pulled off the role in a petticoat if she’d had to. Such a literal interpretation of Richard’s manly ugliness trapped the actress in a one-note villainous conundrum. Wearing her grossness 100% on the outside, McKenna’s Richard wasn’t allowed as rich an inner life as most Richards are, she had to be twice as charming to convince and cajole the way Richard prides himself on. Gone was the fun and traumatizing push and pull of the antihero- all signs pointed to “this is a villain, steer clear”! Seana McKenna’s performance was no better or worse than it would have been from a leading man of comparable talent. But if it had been a man I’ve got a sneaking suspicion director Miles Potter would have given him more to work with- an interpretation. Instead, all poor Ms. McKenna got was the pathetic interpretation of “look, it’s a woman! Aren’t we clever?!”.

Amidst the uninteresting interpretation there were some definite highlights that made the whole thing more than worth it. First of all, McKenna was very good. I know it sounds a bit like she wasn’t but she was given a rich character and was not allowed to play very many of his complexities at all, the fact that she managed to ground a compelling show within those confines is a testament to her incredible performance. I also loved Martha Henry as Margaret, the bitter and borderline crazy widow of York enemy Henry VI. Henry played the embittered curse-wielder as a real threat- a queen, a mother, a murderer- instead of the odd, sometimes laughable presence she can be. The part of Margaret is balanced precariously on the line between absurdity and profundity and the legendary Martha Henry navigated it beautifully.

Yanna McIntosh fared less well. I’ve never been a fan of her over dramatic approach to, well, everything. The way she flings herself about I find it harder and harder not to laugh every time. That said, she nailed the second half of the crucial act four scene four and that’s the Elizabeth scene that really sticks with the audience. One of play’s few “interpretive” elements was the deliberate racial casting surrounding Elizabeth. Racial casting is not something Stratford generally does (when I saw Merry Wives Anne Page morphed from white Andrea Runge to black Sophia Walker then back again without hoopla), which is why I was surprised to see the roles of Elizabeth’s kinsmen somewhat arbitrarily filled with exclusively black actors. It’s not at all noteworthy for McIntosh to get a massive leading role like Elizabeth and the issue was never actually addressed in the production but for some reason the casting directors felt it necessary to segregate Elizabeth’s family from the rest of Richard’s world. I suppose that makes sense in a process where “look she’s a woman!” is considered a character interpretation, “look they’re black!” is tragically and confusingly a thing. On both counts (sexual and racial) this production just didn’t seem to belong in the more-interesting-than-that world of the Stratford Festival.

It did make use, however, of the superb company of actors Stratford offers. Relative newcomer Bethany Jillard was wonderful as Lady Anne; strong and conflicted with a wonderful plainspoken-ness with the verse. Michael Spencer-Davis was a very sympathetic Clarence though the murders lacked the cruel creativity of more visceral productions. Even the small parts were filled with experts in their field. The brilliant Laura Condlln enjoyed approximately 3 lines as a Citizen and I spent about a minute thinking “this is an awfully good messenger” before realizing that it was actually Gareth Potter double cast before his entrance as the heroic Richmond. Another small delight was Cyrus Lane as a surprisingly memorable Scrivener, his voice perhaps a bit too commanding for such a lowly post. But all this greatness was, tragically, punctuated by the gaping hole in the role of Buckingham. Wayne Best held his own passably but the mere thought of what the late great Peter Donaldson would have done with the role he was supposed to fill left a dark cloud blocking out Best’s performance.

Richard III is a really cool play and this cast was a really special one. But it was quite simply terribly directed. Miles Potter boxed his characters in, taking away their ability to really play with the brilliant text and reach the incredible potential the ingredients of this production could have added up to.