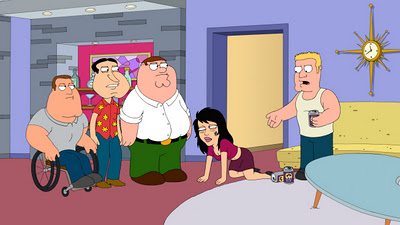 Family Guy is a ridiculous show that I watch mostly just in reruns. But its diverse comic style and occasional moments of poignancy make it worth it to try and mine out the greater moments buried in some of the silliness. A perfect example is in the landmark 150th episode when one of the more beautiful explorations of friendship ever on TV (complete with Stewie’s perfect line to Brian: “I love you as one loves another person whom one simply cannot do without”) is hidden amidst a story wherein Brian licks Stewie’s soiled bum clean. The latest offering from the Seth MacFarlane flagship was a surprisingly thoughtful one, tackling the weighty social issue of domestic abuse.

It wasn’t a particularly funny episode (in fact, with a notable absence of star characters Brian and Stewie, the only character who made me laugh at all was Meg- and that was only with her “I thought, if he likes you enough, maybe you can change him” line) but, being an adult comedy animation show, Family Guy found a way to tackle the incomprehensible issue at hand without preaching or descending into melodrama. The show kept its comedic head on its shoulders, which somehow allowed them to speak more honestly than a live action show ever could.

The usually absurd Quagmire took centre stage this episode by nearly killing himself during autoerotic asphyxiation, which prompted the introduction of his sister and her abusive boyfriend. A stirring, serious and irony-free speech at a failed intervention marks a breakthrough for Quagmire, his most human and vulnerable moment in the 10 year series. As he conferred with his friends, finally agreeing to Goodbye Earl* the offending boyfriend, Quagmire brings up a good point: what happened to the days when a group of guys sees another guy treat a woman badly and goes to knock some sense into him? Killing the dude, in a non-animation-based way is clearly not the correct choice, neither is violence of any kind, really, but the point stands: what happened to the collective disapproval, to the urge to stand up for the unprotected, to the notion that there’s such a thing as the unacceptable? It’s not about the men banding together to beat up some guy to save a damsel in distress, it’s about the societal urge to stand up for one another- it’s a point beautifully made (with an excellently light touch) and, hopefully, well taken.

Family Guys gets a lot of flack, especially from Simpsons loyals. But you’ve got to admit, sometimes it’s really got something to say and is somehow oddly and brilliantly suited to say it surprisingly loudly.

*the The Dixie Chicks song in which 2 best friends murder one of their ex-husbands after “he walk[ed] right through [a] restraining order and put her in intensive care”. A great song that lives in some seriously grey moral territory.