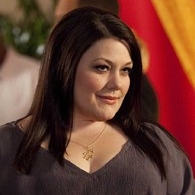 The worst had to be the overdramatic and boring Parker storyline. *Spoiler Alert*. I like Parker as a character, I think his battle between self-loathing and narcissism is one of the more complex character arcs on the show (“yeah, I’m a prince”). He doesn’t need a long-lost son to give his story gravitas- that’s just an obnoxious TV trope, little else. And Brandy as his baby mama? There are few actresses who annoy me more than the breathy would-be popstar; any chance we can kill her off and saddle Parker with the kid? That’s a spinoff I would totally watch.

Kim’s wishy washy-ness and general lack of story arc was also a source of annoyance (I think she’s great, though perpetually underused). But other than that, I had very few qualms with the overall excellent season.

Stacy’s career success may have come on a bit suddenly but the fallout for her relationships with Jane and Fred was really compelling. For Jane, it took away her one true confidante and for Fred, it literally took away his reason for living- not in the suicidal sense, in the “I gave up Heaven for her” sense. I’m surprised Fred wasn’t more skeptical of Jane’s revelation about Stacy at the end of the season, but that whole “big misunderstanding” device was generally ridiculous.

The cases were an interesting mix of craziness this year. I particularly enjoyed the sperm bank story early in the season and the Medieval Times one near the end. The latter was great, if not for the dorky fun of it all, particularly for the juxtaposition it created between leading man Grayson and Jane’s current flame Owen. In what I’m hoping was setup for season four’s principal romantic arc, the show pitted the two men against one another and used the zaniness of the case to show for the first time that there might be a man who’s (at least seemingly) better for Jane than Grayson, even though the Deb part of her wants him.

Actually, that idea of who’s good enough for whom was a major part of what I liked about season three. After having predictably dispensed with Grayson’s fiancee, the series drove him into the arms of a waitress with a tramp stamp- one of Deb’s old friends. It was an easily overlooked, potentially off-putting plot that had an interesting effect on Jane. Seeing Grayson with the waitress led to the horrifying realization that maybe Deb wasn’t really good enough for Grayson. This key revelation is what opens the door to my being okay with the showrunners’ stated end game of getting Grayson and Jane together. They’ve repeatedly said that the series is about getting both characters to the point where they are able to be together. Jane/Deb’s always wished she could be just Deb again if for no other reason than she could have Grayson back. But now she sees that that’s maybe not good enough any more. He deserves better and now, she realizes, with her new body she might just be that better. It’s the small story that finally sold me on them as a potential couple.

And speaking of Grayson and Jane, *major spoiler alert* Stacy’s act five revelation about Jane’s true identity may or may not have spun the show off into an entirely new direction. I have no doubt that season four will see Jane, Fred and Parker all returned from their various quests for self, but- assuming Stacy really did fully spill instead of just giving Grayson some hints that could be explained away in a matter of scenes- now Grayson knows who Jane really is. What I’m hoping they do with that twist is play on the idea that Grayson loves Deb/Jane enough to want her to be happy. And when she returns from Italy that means being with Owen, so he doesn’t reveal that he knows the truth. That sort of mutual deception that’s rooted in selfless love could mean all sorts of wonderful stories for Jane and Grayson going forward, it would earn them their happy ending but put it off for another while and give the actors a wonderful new world of motivations to play after poor Jackson Hurst has been stuck with “ignorant good guy” for 3 years now.

It was a solid season of Diva that held the promise of a fascinating future, assuming the writers don’t just restart the clock again and pretend there was no revelation of any kind.

Finale Grade: B
Season Grade: B+