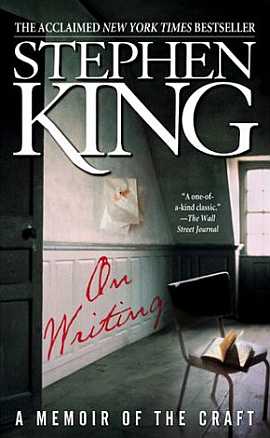 Rachael on Stephen King on Writing

It’s rare that you get to say a book changed your life and not be talking at least somewhat hyperbolically. It’s even rarer to get to say that about a book by Stephen King.

I’m not trying to knock the man whose name is ridiculously appropriate given that he is the King of pulp horror novels. It’s just that Stephen King doesn’t really put a lot of pretensions into his writing. He’s there to tell a good story, and tell it well. He doesn’t consider himself a great, life-changing writer. He is ambitious when it comes to the scope and breadth of his writing repertoire, but not in terms of the pretensions of the individual novels. And I’m sure he feels the same about the book about which I am here to talk, his 2000 memoir/writing guide On Writing. Nonetheless, On Writing changed my life. Twice.

I first received On Writing for Christmas freshman year of high school. I tore through it. I’d never read a Stephen King novel before (I grew up in a house with a somewhat messed-up relationship with pretentious books, we had no problem reading pulp sci-fi but avoided the James Pattersons and Stephen Kings of the world until we were older), but I loved his matter-of-fact speaking voice. His no-nonsense approach to writing (where he tears apart his own process and the building blocks it’s necessary to have in order to write a compelling narrative) spoke to the budding author in me. And the compelling personal story, detailing Stevie’s rise from impoverished latch key kid to probably the most famous author who’s not British, served to anchor all the rhetoric.

And then I mostly put it out of my head. I got really into journalism and screenwriting, and then, later on, lesson planning. I took a lot of lessons from On Writing (namely, to limit my use of adverbs to the bare minimum and to use the phrase “she said” rather than “she lamented”), but I moved on.

So when I found myself trying to scrape back to a place where I could legitimately call myself a writer again, I found myself digging up my copy. And the book, once again, transformed the way I look at the craft of writing. King has just enough reverence for the job to keep you feeling uplifted, while also accepting the truth of the fact that writing is something that everybody has to work at. He also advocates for a stringent plan of reading and writing to enhance your skills that really speaks to me as I attempt to figure out how to improve in my post-collegiate existence.

There are parts I definitely disagree with. Year 2000 Stephen King had a major problem with television that I simply can’t abide (though it’s a problem that I think modern Stephen King, who writes rhapsodic pieces for Entertainment Weekly about Breaking Bad and Mad Men, would probably find somewhat embarrassing) . And his complete adherence to story over all else probably won’t work well for people more inclined to start somewhere else in their own writing process.

But whether you want to one day cash $200,000 paychecks for Carrie, or if you’re just someone who occasionally spends a productive hour or two on your keyboard, On Writing is a great story told well. And let me tell you, it makes a really inspiring gift to a 14 year old trying to figure out how to turn her A’s on English essays into something resembling a career goal.