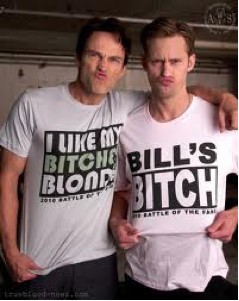 If you want to read an in-depth review of the final episode of True Blood, check out the AV Club’s insightful dismantling of the shows conventions or io9’s cheerful recounting of the climactic deaths. True Blood is not a show that I spend enough of my brain on to be able to really comment on most of it. I experience True Blood like a roller coaster ride; I’m pretty sure that I (and by extension, characters like LaFayette, Eric, the King version of Bill, Pam and Jason- all of whom I love) am safe on the ride, but I still enjoy the jolts and drops as we make our way to a simultaneously expected and yet unexpected ending. As pretty as that metaphor was, it doesn’t lead towards a very good vantage point from which to write about the show.

Except to say this: just as I found the fanged protagonists in season 5 of Angel (Spike and Angel) to be the best relationship on the series, I think the best, most consistently compelling couple on this show is Eric and Bill.

I don’t mean them engaged in weird threesomes with Sookie, I mean their bantering brings out the best in both characters, and allows them to be decent vampire beings while still being complete badasses. Every scene that features Alexander Skarsgaard and Stephen Moyer working together in disharmony is a joy. Plus, it helps fight the inevitable tide toward puppydom that their being around Sookie entails.

Do you really want to watch the “who’s going to get Sookie’s ‘precious fairy vagina’?” show?

I didn’t think so. And it’s not just that Sookie is a frustrating character (I probably like her better than most people do, but even I find her constant waffling and refusal to use her obvious super powers until the last possible second frustrating), even if Pam’s articulate outbursts about her do seem to echo fan frustrations.

Bill and Eric are great characters, but when their only motivation is “fucking Sookie” (and I actually didn’t mean that in the dirty way it appears, but I’ll take the entendre), they become weak badasses. Let me ask you, do the men staring pathetically at Sookie in that picture look like more fun than these two?*:

Up until this season, I threw Bill in the pile of meh characters that True Blood inexplicably keeps around.

This season, when Stephen Moyer was given something more to do than attempt to protect Sookie, Vampire Bill became one of the most consistently entertaining parts of this show. Eric has always been a highlight, and Moyer and Skarsgaard’s odd couple chemistry can sell pretty much any scene they’re in.

So here’s to Sookie’s sudden independent streak, because I’m pretty sure the only thing powerful enough to take on a renewed and angry King of Mississippi is the power of Bromance.

*Side note: there are some truly awesome photoshopped photos of Bill and Eric together if you google search “Bill and Eric True Blood”