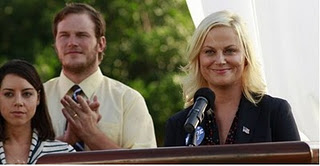 The return of Parks and Rec was probably my favorite premiere of the season. Not because it was so ground breaking; I don’t even think it was that astounding of an episode (I mean, it was good, and character pitch perfect, and the triumphant arrival of Tammy I was definitely worth all the hype, and… oh screw it- It was a Fantastic Episode). But honestly, I just love Amy Poehler’s Leslie Knope more than I think I’ve loved any blonde protagonist not named Veronica.

Watching Leslie agonize all episode over ending things with Ben was heartbreaking, but I love the show’s insistence that Leslie is making the right call not giving up her career for a fledgling relationship. When Ben so warmly slid the box over to Leslie, signaling that he was okay, if slightly heartbroken, with the way things turned out, it proved to me every great thing I’ve ever thought about this show. Leslie is an unprecedented female protagonist, a force for good and kind wackiness in a world full of snobs from Eagleton.

I really hope Leslie and Ben work this crap out some day, but, honestly, I just can’t wait until the series finale flash forward to Leslie running for president.