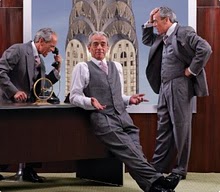 At the Shaw: The President

Of the 11 productions at The Shaw Festival this year, there wasn’t a single one I enjoyed more than the lightening-paced lunchtime one-act The President. The zippy script by Fenrenc Molnar moves so fast that director Blair Williams seems to have choreographed it more than staged it- the entrances and exits are so precisely planned, the rhythms so crucial that one flubbed line or late cue could send the entire production off the rails. Luckily, Williams’ clever staging and Molnar’s thrilling script are in very capable hands.

The ensemble is strong enough- Jeff Meadows is lovably doofy, Julie Martell is charmingly coquettish- but The President belongs to Lorne Kennedy. He speaks about 95% of the dialogue in the piece, zipping around at breakneck pace for the full hour-long show. The feat is impressive enough- the sheer volume and speed of dialogue is more than most actors could handle, but Kennedy also manages to squeeze a little acting in there with all the recitation. His take on high-powered Norrison is efficient, capable and ultimately caring and well intentioned. It’s his panic that incites the action but armed with a basic touchstone of good-guy-ness beneath the arguable corruption, Kennedy’s Norrison is less a frazzled dictator and more a conscientious and level-headed highly effective person (you know, the kind that has 7 good habits and ends up ruling the world).

And while The President’s hyperspeed total-life-makeover story has its Shavian questions of corporate oppression, conformity and the corrupting power of wealth to lend it thoughtful gravitas, it’s mostly just an hour of pure, high octane, high IQ enjoyment. It’s sparkly in the best sense of well-paced comedy and packed with more laughs than the rest of the Shaw season combined. Norrison’s presumptive take-control approach barrels right over the lesser-human beings in the audience (aka everyone who’s not Norrison) as it does poor schlub/project Tony Foot- he’s already moved on to teaching Tony stock responses to basic social questions by the time it lands with us the fact that he really did just officially change the man’s political views, get him adopted by a stranger and buy him an ambassadorship.

The President is a barrel of laughs without being at all shallow for it. It’s the rollicking adventure of the season and more fun than anything I’ve seen possibly since The Hotel Nepenthe.

The President plays at the Royal George Theatre in Niagara-on-the-Lake until October 9th.