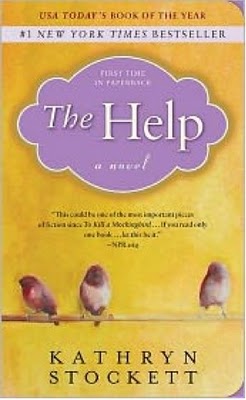 I am happy to admit I indulge in the time-honored tradition of hurrying to read a book before a movie comes out. I’d like to think that I DON’T do this just so I can sound smart and say things like, “Well, yes the movie portrays her angst in a very visual way, but it loses the book’s subtlety in representing her ennui” (which, is, for the record, what I imagine to be a stupid thing to say about a book-turned-movie). I’d like to think that I do this because I love stories, and prefer to visualize them in my own head before I see them on screen. But it’s possible I’m just kind of a tool.

Anyway, in anticipation of the new Emma Stone vehicle that had me tearing up every time I saw the trailer, I decided to read The Help. I’m a sucker for southern-fried racism stories, and enjoy a good “plucky women overcome stereotypes” yarn. So, in my summer-induced boredom, I plunked my behind down in the middle of Barnes and Noble and started reading.

Six hours later (yes, I sat on the floor of a Barnes and Noble for six hours, I don’t have a real job-screw you), I closed the book. In a summer filled with epic fantasy, this simple tale of three different women figuring out the central thesis that underneath our skin color we’re all just people had me epically gripped.

The book tells the tale of Abilene, Minny and Skeeter.

Abilene, on first glance, seems like the type of subservient black women you see in the background of Gone With the Wind or old society comedies starring Katherine Hepburn. She’s raised 17 white children throughout her career as a maid in Jackson, Mississippi, and until the recent death of her son didn’t question the status quo that forced her to drop out of school in seventh grade and spend the rest of her life raising and falling in love with the same children who would be her oppressors ten years later.

Minny is full of sass. She can’t stop her mouth for anything, and so she can’t keep a job. She has a husband who beats her and whole gaggle of kids to support. She has a lot of opinions, about everything, and a heartbreaking life story.

And Skeeter is a gawky, awkward old maid at the ripe old age of 23, wanting desperately to break out of her society girl upbringing but floundering at how exactly to do that.

When I first saw the preview for the movie, I thought The Help was going to be one of those stories, where either a white gal wanders in and saves the impoverished black women around her or where the black characters serve solely as lessons for the book’s white protagonist. Neither is the case. In fact, all three characters are well developed, fascinating women with their own problems and their own agency. They each support each other and change each other’s viewpoints about race and love, and they all have to perform their own salvation in order to reach the end of the book. Not a one of them (or the supporting characters in the book, for that matter) serves only as a prop in someone else’s story. This is the book’s strongest point, I can’t stress enough just how unique it is within the genre (see also: The Secret Lives of Bees).

I can’t speak to how accurate the book’s portrayal of 1960s racial tension in Jackson is, but I can see that author Kathryn Stockett makes the problem feel visceral. Despite having seen the upbeat-looking commercials for the film, I was deeply worried for the characters throughout the book, and deeply invested in not only their survival, but in their capacity to overcome what seems insurmountable.
I don’t know whether the movie will allow me to wax pretentious about book to screen translations, but I do know that with a story as good as The Help, I hope they change as little as possible.