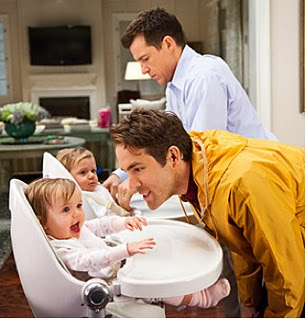 “The Change Up”: making good off a bad premise

The Change Up is exactly what you see in the commercials. It’s crass to the point of gross, it’s awkward to the point of putting your hands up to cover your eyes, and it’s funny. It also hinges heavily on the charisma and comedic chops of Jason Bateman and Ryan Reynolds*, which as far as places to hinge go, is not such a bad idea.

The Change Up tells the story of David (Bateman), stand-up lawyer and father who works all the time and neglects to have fun, even to the extent that his wife feels neglected and he’s started to lose touch with his childhood friend, Mitch (Reynolds). Mitch, for his turn, is a perpetual quitter who has skated by in life on a mixture of money from daddy and ridiculously good looks, and who spends most of his life behaving like a fourteen year old who woke up in Ryan Reynolds’ body (ooo, someone get me an agent quick, so I can sell that screenplay idea!).

But the premise is hardly the point of a movie like this. Jason Bateman was recently on The Daily Show, and when Jon jokingly pointed out that the premise was pretty hackneyed, Bateman said something along the lines of “you’re right, it’s shit, but the movie is really freaking funny and by taking such a Hard-R look at this goofy premise we are actually doing something pretty unique.” That’s a pretty apt assessment of what the final product looks like. With Reynolds and Bateman starring, this formulaic idea seems surprisingly fresh, and while the particular brand of go-for-broke gross-out humor may not resonate with everyone, I found it pretty enjoyable.

Leslie Mann, who must be the hardest suffering onscreen wife of our generation, does a good job of playing the bemused wife, and I actually thought that the emotions in her part of the storyline were surprisingly well played. Less so with Dave’s office flirtation, Olive Wilde, who he kind of dates while trapped in Mitch’s body. This storyline felt kind of icky and unnecessary, especially given how good the Leslie Mann storyline was.

The jokes are fresh even if the conceit is not, and the acting in The Change Up is more than enough to carry this to its overwrought conclusion.

*Side note: how could The Green Lantern have made Ryan Reynolds seem so generic? This guy is fantastic and super funny here, which is not fair considering he looks like he does.