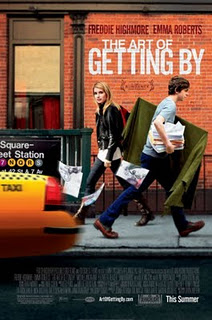 The Art of Nothing At All

The Art of Getting By is a truly terrible film. I had high hopes for what looked like a sweet, earnest and artsy coming-of-age story but what I got instead was a pretentious wannabe indie darling with a lame hipster “New York insider” attitude. The film’s principle themes of art and love as salvation are admirable but their condescending and derivative presentation left me literally yelling at the screen (seriously, I was the only person in the giant theatre, so I took the opportunity to scold the characters and filmmakers- it was wonderfully cathartic, if a little lunatic-seeming).

The story essentially boils down to that of an exceptional boy (played by Freddie Highmore, who apparently has been busy ageing in these last few years while we weren’t watching- whod’a thunk?). Said exceptional boy spends the entirety of the film (and his life preceding it) trying his darndest not to be exceptional. The plot really kicks off when he falls for a girl who is, in every way, unexceptional (Emma Roberts, the powerless victim of a vile role).

My journey through the film was preoccupied almost entirely with the central question of “why does he love this girl?”. She’s not that bright, she has no real talents to speak of, she’s not particularly charming, interesting, loyal or inspiring, nor is she beautiful enough to make such things moot points. The relationship between George (Highmore) and Sally (Roberts) seems to operate under a movie trope soulmate mythology that doesn’t apply to any of its other characters (almost everyone else is unhappily matched and multiply divorced).

There are a few highlights in the film, however. A dowdy and frank Alicia Silverstone is a nice addition and an interesting departure for the underworked actress. And Sam Robards turns in a rare interesting character as George’s stepfather. We’re not supposed to like him, but his no-nonsense wicked stepfathering is exactly what our idiotically melancholy “protagonist” needs. His best contribution? Responding to George’s declaration that he’s “struggling with something emotional” with “well, that’s stupid!”. He’s right, it is stupid, every single one of George’s “problems” would go away if he would just buck the frack up!

The final highlight comes in the somewhat surprising form of former child star Michael Angarano as George’s “mentor”/betrayer Dustin. The inconsistent character isn’t all excellence, but he does add some of the film’s most interesting dynamics when he exerts sourceless and arbitrary influence over George’s artistic taste, declaring “you love this” with enough false authority that he doesn’t need evidence.

Sadly, that’s where the good stuff ends. That’s literally all there is. The rest is all sappy motherly pep talks from Rita Wilson and unfounded patience from the tragically miscast Blair Underwood. Oh, and there’s that inevitable moment when they reveal that George’s life-changing painting that you were really hoping wouldn’t be a portrait of the girl is a portrait of the girl.

The Art of Getting By is that horrifying combination of terrible and haughty about it. It thinks it’s damn clever, which is too bad because the film is a lot of things, but clever is not one of them.