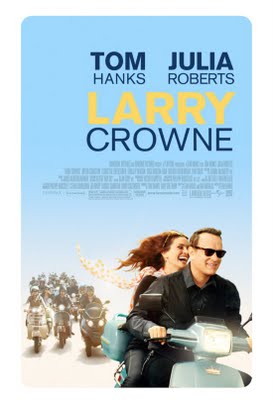 The Antidote to Cynicism

My best friend informs me that “Larry Crowne is so stupid!” He’s usually more eloquent than that, just not when he’s wrong. On his international press tour for the film, writer/director/star/most-beloved-man-in-Hollywood Tom Hanks had a single line that he trotted out in some form or another every one of the 4 million or so times he was asked what the film was about: “it’s an antidote to cynicism”. I think it’s that very feature that my “realist” friend so ineloquently can’t get behind. I, on the other hand, am all for it. When Conan O’Brien was leaving The Tonight Show, endlessly bitter and fundamentally heartbroken, his parting words were a plea that his audience not be cynical. “It’s the most useless thing in the world”, he said of the state he had every right to be in. And Conan was, as he often is, very right. For almost everyone I know, 2011 has been an absolute shit (excuse the language, there just is no true synonym). But the people who are making it through the best are the ones with the acute awareness that 2012 is just around the corner and that it, surely, will be better. Larry Crowne is a film about possibility, the counter-argument to the “lost potential”, “missed opportunity”, “you only peak once” narratives that have come to dominate our overly competitive lives.

The world of Larry Crowne is filled with characters just colourful enough to represent the best of us without leaving reality behind in favour of cinematic quirk. Cedric the Entertainer and Taraji P Henson are delightful as Larry’s sympathetic neighbours and owners of the exclusive rights to garage sales. Gugu Mbatha-Raw’s Talia is balanced well enough by her threatening, jealous/secret-nice-guy boyfriend (Wilmer Valderrama) that she never slips into the predictable territory she walks near. The rest of the supporting characters are played by more of TV’s best, including Better Off Ted’s Malcolm Barrett, the one and only George Takei (Star Trek) and my beloved Ian Gomez (Felicity, Cougar Town) as a confident diner owner. Larry’s classmates in Professor Tainot’s Speech class are perhaps my favourite though, with scene-stealing Rami Malek tearing it up as a young man insistent that the teacher understand that his name is not “clairvoyant”, it’s “Steve Dibiasi!”.

The nuanced writing (by Hanks and the wonderful Nia Vardalos) is wonderfully tight with character voices that are distinct and grounded in the background, lifestyle and education of their speakers.

But ultimately it’s Hanks and Roberts who own the show. Some critics declared their disappointment with the film, citing the average instead of spectacular chemistry between the two megastars as the dealbreaker of the movie. I’m not sure said people understood the movie very well. Larry and Mercedes do have a romance- a cute, low-key one that gets minimal screentime- but the allure of Hanks and Roberts has never been their chemistry- not with any costars, really (though I do love him paired with Meg Ryan). They’re both wonderfully sympathetic, emotive, engaging and bright. They don’t sizzle, they sparkle and it’s that light connection that makes them the perfect team for this film, not some sort of intense romantic chemistry. What they do well is subtle, lived-in characters. Hanks has never been reputed as the sexiest man alive, but there isn’t a person on the planet whose heart wouldn’t go out to him as he expertly fights back tears and mumbles “I thought I was employee of the month”.

Larry’s character is perfectly developed from the moment we meet him and Hanks morphs beautifully into it, allowing small traits to separate the character he created from himself instead of molding him out of makeup and hairstyles. One of the first things the audience sees is Larry obsessively collecting shopping carts and re-stocking the shelves of the big box store like a well-oiled machine. When I saw the film with my father he thought this evoked an almost Forest Gump-like idiot-savant focus, I just thought it showed him as efficient, achievement-oriented and determined. It was the fervour with which Larry attacked his mediocre job that hinted at his ability to be successful when he left it. The creativity and intensity that earns him his A+ in Tainot’s class shows up in that first scene the way Sirius is name-dropped in The Sorceror’s Stone’s very first chapter. Everything that Larry is is there from the moment we meet him, the rest of the film is the story of how he applies it.

Though the script is delightfully packed with clever allusions from Shakespeare to Shaw to Gilbert and Sullivan to Star Trek, what it doesn’t do is condescend to someone who doesn’t get the reference. A major part of Larry’s redemption comes in the form or education, but it is also so much of what is trapping Mercedes in her misery. Education’s role in the (admittedly very literate) film is as one of the many things in life that does for you what you take from it. As an arbitrary measure of success or worth, academics can be oppressive (as seen in Mercedes’ accomplished but unworthy husband, played by the absolutely wonderful Bryan Cranston). But learning as a means to what you want or for the sake of knowledge, like Larry’s quest for a business degree and Mercedes’ love of great literature, that is a worthy pursuit. There is no happy character in Larry Crowne who is happy because they are educated or because they aren’t, because they are wealthy or because they aren’t. The film isn’t pro-anything but happiness, and maybe scooters.

Larry Crowne is full of simple pleasures, small kindnesses, unremarkable triumphs and human connections devoid of flash and drama. The love story isn’t going down in history, Larry’s A in Speech isn’t going to change the world and Talia’s thrift store isn’t starting a national trend. And that’s okay. The film celebrates salvation through happiness. It’s not a good education or a new haircut or a hot girlfriend that the film touts as the key to everything, it’s looking at the crap life’s thrown you and finding a way to be happy anyway. If that’s “stupid” then sign me up for a life of blissful ignorance.