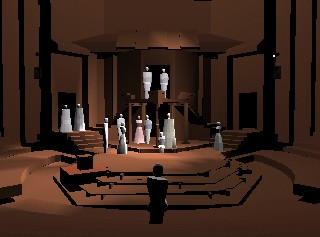 From the Desk of an Irrational Dreamer, a Much Ado Dream Cast

The Stratford Shakespeare Festival has already announced their 2012 lineup, but other than Christopher Plummer’s return in A Word or Two, the casting still remains largely a mystery. So, before my dreams are dashed by the inevitability of some of my favourites not returning, I thought I’d speculate about what would be my ideal casting.

I’d like to see the festival go out and find a versatile Quebecois actress for Katherine in Henry V and maybe cast my current favourite leading man Evan Buliung as the titular hero. I’d enjoy a feisty Bethany Jillard Imogen and maybe a stoic Mike Shara as Cloten with my beloved Tom Rooney as Cymbeline (though if I could, I would cast him everywhere!). With a bunch of new commissions and an operetta that’s beyond the current musical company in the lineup it’s hard to say how most of the parts will fall, and I can’t even begin to brainstorm who could be playing Charlie Brown (though Laura Condlln as Lucy- come on, that’d be brilliant!)

But what I can do is dream cast the fantastic set of roles in next season’s principal comedy: Much Ado About Nothing. I expect almost none of these dreams to come true, but wouldn’t they be wonderful?

First up is the crucial role of Shakespeare’s wittiest woman, Beatrice. After a demanding dramatic season in Titus, I’d like to see Amanda Lisman return to the comedy she brought out in 2008’s Cyrano and bring her strength and intelligence to Benedick’s better half.

Then, for her Benedick, My Theatre favourite Dion Johnstone would fit the bill nicely. He’s charming, he’s smart, he’s played enough villains to tap into Benedick’s jerkier instincts but he’s sweet enough to not let him be lost to the war-of-words dark side. His Macduff pedigree lays the groundwork for Benedick’s soldierly side, Valentine for the bro-ish bonding and Grey for the unflagging loyalty. And it’s about time he got some light banter.

Perhaps my most daring choice is for the young lover Claudio. I’m a big fan of the oft-overlooked Bruce Godfree and think he’d be excellent in the part. He’s got a sweet baby face that could easily sell Claudio’s open heart and gullibility and his energy would play wonderfully off of the more grounded men in his company, lending his Claudio an almost Romeo-like air of impetuousness. But if we learned anything from his terrifying turn as Demetrius this season it’s that the moment when sweet Claudio turns on Hero could be startling and effective in Godfree’s hands.

Next was possibly the easiest decision of the list: Bethany Jillard as Hero. She’s sweet and cute and young- all the things a believable ingénue should be. But she’s also fantastically grounded and exudes intelligence, qualities any Hero needs to keep the character from slipping into silly territory very very quickly. Jilliard could make that under-written part into much more than it is.

As the group leader Don Pedro, I choose the handsome and confident Mike Shara. He’s charming but won’t outshine Benedick and has a natural leadership quality. But he also seems perhaps a tad too slick at times, a fascinating quality in a suspiciously perfect character.

A vaguely shady Don Pedro would do wonders for the could-be but often-not fascinating character of his villainous brother Don John– a role I would give to Gareth Potter. I have no idea why I think this but I’m fairly certain the charming actor has a stellar villain buried somewhere beneath the Romeos and Richmonds. His excellent Proteus hinted at some darkness last season but a full-out villain would be great on such a wholesome-seeming actor. And after this year’s brave performance in Hosanna, I’m thinking Potter’s ready to start stretching his chameleon skills.

The rest of the cast is where I’ve started just throwing in my favourite festival talents wherever I could fit them.

I’d start with Geraint Wyn Davies as Leonato, a part he’s perhaps still a little bit too young for but with Peter Donaldson gone there isn’t someone else I would really want in the part.

By a similar token, let’s go with Timothy D. Stickney for Antonio. The solid actor was severely undercast this season and his imposing frame might be interesting in that disastrous wedding scene.

For the conspiring handmaidens, I’d go with the wonderful Laura Condlln as Ursula (mostly just because I’d want to cast her, and Merry Wives proved she’s particularly excellent while scheming) and Cara Ricketts for Margaret. Regular readers might be surprised by this one as I’ve never liked Ricketts’ take on the ingénues she’s always played, but she is stellar as Maria in Twelfth Night, which leads me to believe that a bawdy side role is better suited to the actress. I think she’d make a fun Margaret and I have a suspicion she’d really bust out with some of the sexier comedy.

As Margaret’s devious boyfriend Borachio, I’m partial to the idea of Evan Buliung and his Mr-Nice-Guy face. He’d have no trouble deceiving Margaret without making her seem dumb for falling for it. As his comrade Conrad I nominate Ian Lake, because he’s really good but sometimes it’s hard to notice.

And finally, for the potentially painful clown duo of Dogberry and Verges, I trust my Stratford MVP Tom Rooney who’s made much of not one but TWO potential fops this season and is a general genius. Merry Wives breakout Christopher Prentice would put his comic skills to good use as his assistant Verges and somehow manage to not be completely overshadowed.

Now wouldn’t that be a good show?

Come on Des, you know you read this site for tips! (If, in some bizarre reality, you do read this, thanks for picking some seriously stellar Shakespeare for next season! Cymbeline’s a smart kid choice- count me impressed.)

*Just for the record, if I had endless roles to cast I would absolutely positively find some place for the extreme talents of my other festival favourites: Ben Carlson, Seana McKenna, Andrea Runge, Mike Nadajewski, Brent Carver, Sophia Walker and Dan Chameroy.