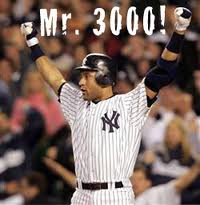 It may be the obvious choice, but there is only one right choice for  Sports Superstar of last week, Derek Jeter. Now, as a Red Sox fan the idea of naming a Yankee as the sportsman of the week may seem strange, but Derek Jeter is not just a member of the Yankees. Jeter is one of the most respectful sports players out there. His behavior on and off the field makes him one of the few men in sports that every person can say that they appreciate no matter where there affiliations lie.

After a stint on the DL for a strained calf, Jeter came back to become the 28th player in baseball history to accumulate 3000 hits. Not only did he become Mr. 3000, but he was the first Yankee player to hit this milestone and only the second player to do it with a homerun. He was also the first player to achieve this at Yankee stadium, new or old, and the 4th youngest to do it ever. Jeter hadn’t hit a homerun over the fence in Yankee Stadium in over a year and this was only his 3rd home run of the season. But after hitting the long-awaited milestone, Jeter went 5 for 5 in a win over the Tampa Bay Rays. After that amazing game I look forward to seeing what this phenomenal sportsman will do next.