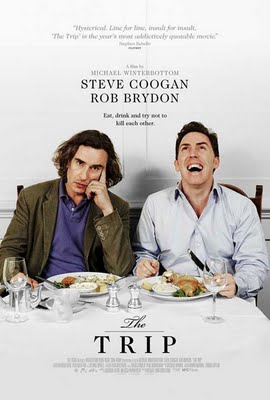 On The Road w/ Coogan and Brydon

The Trip is an odd film. A lot of people won’t like it, it won’t win many awards and in a million years it wouldn’t make for a passing grade in any university film course. Because nothing happens on The Trip. The characters are largely the same when they return as when they leave, there is no significant rising action, no obvious climax, the characters don’t set out with a tangible goal in the “Dorothy just wants to go home”-sense. But like many things that wouldn’t make for a passing grade in a university film course, The Trip is simply wonderful.

Playing slightly exaggerated versions of their real selves, UK comedians Steve Coogan and Rob Brydon set out on a restaurant tour in Northern England. We begin with Coogan half-heartedly inviting Brydon along when his elusive American girlfriend declines. Brydon asks “why me?” and Coogan plays it cool to a mildly insulting degree, insisting that Brydon is his last resort, thus establishing the complex, petulant and achingly real dynamic that becomes the highlight and purpose of the film.

The “action” is peppered with easy hijinks like goofed hotel reservations and delectable shots of various scallop dishes and some great humour comes with the classist absurdity of some of the concoctions they are served on their tour of Britain’s fanciest eateries. But the comic wonder of The Trip comes in the simplest moments of Coogan and Brydon’s interactions.

Brydon, a successful but not overly famous impressionist is, by the film’s account, a very happy man. He’s not terribly enlightened or adventurous, but he’s not a dolt either. Rather, he delights in his comic calling instead of being tortured by it, and makes the best of every twist on the impromptu road trip, despite the overwhelming sense that he’d like nothing more than to be back home with his wife and baby. Coogan, on the other hand, embodies his dissatisfaction in everything he does. Though he works less steadily than Brydon, Coogan is much closer to what one might call “a name”, and he’s damn proud of it. He has no major attachments (despite having both a son and a girlfriend, he’s a very isolated man- using them as excuses more than companions) and lives in a cold, modern apartment- the clichéd symbol for pathetic bachelorhood. We’re told that Coogan and Brydon “work together”, which they don’t really, and that they’ve “known each other a long time”. What they’re rarely (if ever) described as is “friends”.

Nevertheless, that’s what they are: dysfunctional, wrongly suited, mutually torturous, horribly realistic friends. None of that idealized “us against the world” loveliness of most movie friendships, the Coogan/Brydon dynamic is chock full of all the toxic power plays and one-upmanship that marks 90% of real human relationships (though maybe not to this degree). Theirs is the sort of friendship I would casually dump out of misguided self-importance and a demand for mutual respect. But Coogan and Brydon tolerate theirs.

Perhaps it’s the sheer delight of finding someone else who has sophisticated thoughts on ABBA lyrics (my favourite scene in the film), or who will debate the nasality of a proper Michael Cain impression (also fabulous). Maybe Brydon thinks Coogan is smart and fun enough during roadtrip sing-alongs that putting up with a little casual cruelty seems worth it. Maybe Coogan thinks Brydon’s more pleasant than he lets on. In any case, Brydon’s determination to remain at Coogan’s mildly abusive side reveals an inspiring empathy while Coogan’s reliance on Brydon, a man who clearly annoys and underwhelms him, is equally fascinating.

The greatest tension comes when the jealousies Coogan is clearly ashamed to have bubble over into dinner conversation. “My career is not mediocre” declares an exhausted Brydon- a fact that Coogan clearly knows and has been trying adamantly to refute. A later scene wherein Coogan unsuccessfully tries to mimic Brydon’s signature act in front of his bathroom mirror infuses the film with an inexorable melancholy that lingers under every light and lovely scene to come (including Brydon’s fantastic attempts at phone sex using his best Hugh Grant voice- another highlight).

The Trip is the sort of experience that metaphorically parallels itself over and over again. The film could be called a bit slow, very wordy and sometimes silly or petty but ultimately hilarious and poignant- a bit of a slog for a tired viewer but unquestionably worth it. The trip within the film is too long for the characters’ liking and filled with rainy moors, bad cell reception and weird food- but they wouldn’t take it all back if they could. Finally, Coogan and Brydon’s friendship is all sorts of screwy. They torture one another with the grindingly annoying exuberance or morosity of the off-duty comedian. They’re bad for each other, but the friendship trudges along anyway because at the end of the day The Trip is about two guys who like each other despite all their crap.